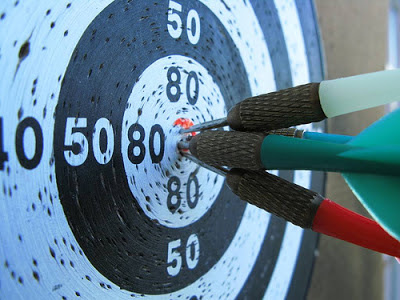 The question for Day 2 of my 20 Days of Gold Making challenge is "if you set yourself a goal, what was your goal & when did you set it?"

I'd been casually making gold for a year before I started to get serious about it but the trigger for a goal was set during an ICC raid towards the end of my raid team's life. We had a new couple in the guild who joined us that evening for the first time & in one of those random conversations over Skype, he mentioned that his wife could buy 5 Mechanohogs if she wanted to (that would have been about 80k at the time). I probably had about 20k gold at that point & I thought I was doing well but when he said that, I decided on the spot that I wanted to beat her gold total!

This was in the summer before Cataclysm arrived & shortly before the whole guild implosion which left me guildless & wandering the streets in solitude. This is the point in time when I started to get serious about gold making. I had no idea there was even a thing called Gold Cap (around 214k gold at that point) but once I started reading gold blogs & learning all about addons & auction house stuff, I quickly changed my goal to Gold Cap.

By the time Cataclysm went live (December 2010), I was at around 50k & the Gold Cap was now 1 million gold. I liked the sound of that so that immediately became my new goal. I added jewelcrafting to my maxed professions list & never really looked back. I started this blog around the same time so if you are interested in my journey, it's all there for you to read.

At around the time I added & maxed my jewelcrafting, Trade Skill Master was becoming more widely used & I hesitated but jumped on the bandwagon anyway. I am so glad I did! It revolutionised my glyph sales & my gem sales to the point where I was spending most of my time on the Obsidium Shuffle & making more gold than I had ever imagined possible!

I eventually hit Gold Cap in July 2011, just 7 months after I really started gold making which isn't too shabby at all. Then I faded! the whole race to Gold cap was my sole driving force to play the game at that point & I struggled to find new goals to push myself towards. I eventually blew a huge chunk of it on mounts & pets so now I'm back below 400k & my new goal is to get back to the million!

I don't tend to set myself intermediate goals - I just poodle along, working the Auction House & trying not to spend too much gold on luxury items in the meantime. I'm not in a rush so I don't want to stress myself out or sidetrack myself from enjoying the rest of the game this time round. If I start setting myself weekly or monthly goals then I will focus on those too much & miss so much content. I'll be quite happy if I can get back to the million by mid to late summer but I am not going to worry if I don't make it.


Image © Erika under Creative Commons licence
Posted by Nev at 18:08