So, it's been a while again but I finally logged into game a few times this last week or so. The first few hours really wore me out - my eyes really had problems adjusting to the whole movement stuff after months of static websites but eventually they settled down & let me get on with trying to remember where I had left everything! I never intended to just stop playing like that, it was just the way it worked out but I lost everything in my mailboxes & I'm pretty sure I had a few big-ish items gone bye-bye but never mind, they would be out of date by now anyway! So my first few evenings back in game were taken up with emptying rubbish out of banks & bags, as well as catching up with my lovely guildies.

Just before I stopped playing, I also signed up for a US account which I played for about 2 hours & never went back! Bad timing all round except that it gave me a lapsed account when the new Scroll of Resurrection was announced so this week, thanks to Cold over at Cold's Gold Factory, I've restarted on that account. No heirlooms, no cash back up, nothing except 50 empty character slots & a few basic addons. Cold doesn't have to worry though, I'm Alliance so his Horde gold making empire is safe ... for now :P

So with a clean slate, I chose my usual human banker, levelled her to level 5 & ran to Stormwind. She had about 8silver to play with. I also started a human hunter to be my main questing alt & by the time she got to Goldshire, she had about 9 silver which I sent to my banker. So with 16 silvers, I bought 2 of the cheapest cooking recipes from the guy in SW Old Town, then ran to the florist on the canals to see if there were any herbs available. There were a few bits & pieces so I bought those up & ran to the Alchemy supplies shop in the mage Quarter, nabbed all the herbs I could there & off I went to the Auction House. 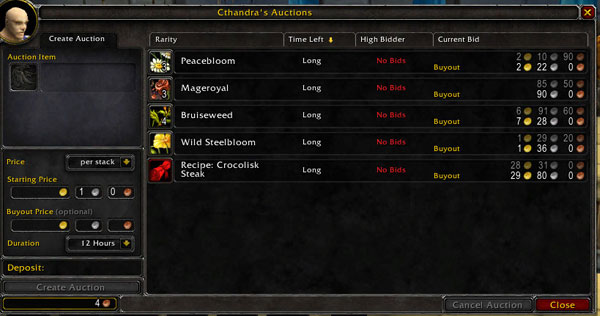 Off I went to the Auction House & started to list my haul of cheap herbs. Arrggggh, I'd forgotten the deposit/listing fee so I only managed to list the 5 auctions shown in the screenie above. Well that was a bust I thought so I logged back to my hunter & did a few more quests. You can tell I'm out of practise at this game too - look - I only listed them for 12 hrs - normally I would pop them up at 24hrs - it's the same deposit for most of them & I don't lose the deposit after just 12 hrs if they don't sell.

So I told myself to slow down & think this through - as I was running back to the alchemy supplies in the Mage Quarter, I passed the fishing trainer & a light bulb went off in my head! I quickly checked the cost of training & a fishing rod & decided to fish for vendor trash for 10 mins.

So in about 10 minutes of fishing I gained a grand total of 9s 24c & 10 achievement points for catching 25 fish! Those 9 silvers let me post the rest of the herbs I'd managed to pick up and as of late this morning, I'm up to about 20gold now. More than enough to really get going again.

Not the biggest gold making revelation, I know but if I've missed this simple way to get some basic starter cash, how many others have too? I know to go get some cheap vendor items & list them but I've been gold making a while now & reading blogs & stuff for even longer. This brand new empty account is kinda reminding me of the basics so I thought I'd pop out a post so I don't forget in future & maybe help a complete newbie to make those first few silvers.