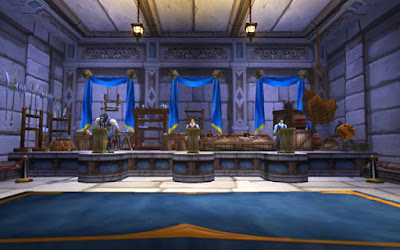 5 Mistakes Players Make When Making Gold in World of Warcraft

Today we're going to take a look at the top reasons why you struggle to make gold in World of Warcraft. Marcus and I came up with a few more than 5 once we got chatting about it on the podcast but they are all linked to these top reasons so read on to find out where you might be going wrong and how to fix it!

Once you have these five points sorted out, you should be able to make WoW gold easily and afford anything you want to buy in World of Warcraft.

Reason 1 - Not Playing the Auction House


For many players, the World of Warcraft Auction House is just an afterthought to their time spent playing. These type of players raid or PvP and just pop to the Auction House at the end of a session and throw stuff up for sale without any research as to best prices or times to sell. Other players I know just sell everything they don't need to a vendor!

Learning to use an Auction House addon like Trade Skill Master (TSM) or Auctionator can make your WoW gold making efforts much easier but they do take a little time to learn. You had to learn how to raid or PvP etc though didn't you? So spending some time learning the mysteries of the Auction House is no different. It's just another aspect of this game we play.

Reason 2 - Not Selling Items That Are In Demand


Part of learning to play the World of Warcraft Auction House is knowing which items are in demand. When you are crafting or gathering, you need to check whether the items you end up with are going to be worth your time and effort. When do most guilds on your server raid? That's a great time to be selling raid supplies like buff potions & foods. Sadly, professions can no longer make blue quality PvP gear or gear enhancements like leg armors which were all good sellers after raids.

This is where addons help too. TSM has the ability to scan the WoW Auction House regularly and build a database of average prices. A quick look at current average prices should tell you whether an item is selling well or not.

Another time that players lose WoW gold is when leveling a profession. There are usually items that sell well even at lower skill levels but if you follow a profession leveling guide, it will just tell to to make 5 or 10 of an item to get the easiest skill points. That's fine if you are in a rush and already have gold but it's a waste of materials and gold if they don't sell. Sometimes it is better to level more slowly but be able to sell the crafted items for a good price.

Reason 3 - Spending Too Much


This is a basic budgeting principle - if you are spending more than you are earning, you won't be making WoW gold and part of making gold is to control your crafting costs. Again this comes back to knowing the average market price of your crafting materials and building a small reserve of correctly priced crafting materials.

You may find a great new market with a craftable item that you can make but if you dive in and buy the materials straight off the WoW Auction House, how do you know if those materials are expensive today? If you can spread your material buying times to when materials are cheap, you will maximise your profit for that item. As I said in episode 43 of the Journal of Marcus Ty podcast, I love bargain shopping and I don't mind buying 200 cheap leathers today that I might not use until next week. It helps me know my costs and profit levels so I can sell my item at best price or hold on to it if the price has dropped this week.

Get Your World of Warcraft Gold Making Guide Now!


Reason 4 - Undercutting Too Much


Linked to reason 3 is undercutting. If I know my crafting cost, I also know exactly how much profit I will make when the item sells. Knowing that profit figure, I can chose how much I want to undercut on the Auction House so that my item sells but I still make profit.

I have seen people undercut by hundreds of gold when all they really needed to do was undercut me by a few coppers or silvers. That would put them at the top of the list when a buyer searches for the item. I have also seen players undercut so far that the listed price is not only below the crafting cost (so that's a loss straightaway!) but the price is also below the vendor price!

Back in Cataclysm, when I was hitting the glyph market hard, I would list a whole bunch of single glyphs, each one undercutting the market by just 5 coppers. Canceling and relisting was a common practise in both glyph and gem markets but I didn't often cancel. I just listed a new glyph at the lower price. That way, if the market was very active, the lower priced glyphs would sell and my first listed glyph would often also sell at the higher price.


If your time in World of Warcraft is limited, you want to be as efficient as possible in your gold making efforts. One example of inefficiency is the gathering professions. Now I'm not saying gathering is bad, just that it's not the best use of your limited time unless you find a market for a material that is selling at crazy good prices.


Two examples spring to mind for me - the Hypnotic Dust market is still very active on my server so running old instances or buying cheap Cataclysm gear to disenchant might be a really good use of your time if you also enjoy the old content. Another market that I found by chance is Pyrite Ore which I mentioned in the podcast. I was just clearing down my bags but I was pleasantly surprised by how much the Ore sold for! 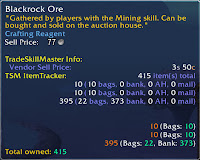 Another example of inefficiency is running between the bank, Auction House and mailbox, shuffling materials around between alts or banks. Using a mailbox addon like Postal helps speed up the mailbox part of your routine but it's out of date now. TSM has a mailing module which most goldmakers have moved to, I think.

Another good thing about TSM, is that not only does it have a nifty Warehousing module which will shift materials around easily for you but it also has an Item Tracker which adds some information to your tooltips, telling you how much of an item you have and where it is. I've blacked out my toon names but as you can see from the screenshot, it shows you exactly where all your items are stored.

Marcus has launched the Warlords of Draenor edition of his gold guide recently. I've read through the whole set of guides and I'd recommend it to anyone who wants a clearer idea of how to make gold in World of Warcraft. If you sign up to my newsletter, you'll get a coupon for 20% off too - just a little thank you for signing up.