First off, I guess I should explain what I mean by resetting markets. When someone tries to undercut the lowest price on the market but leaves a large gap in the prices, then there is an opportunity for you to make some gold. Of course, it does depend on you having enough gold to buy all the cheaper items up and there is a risk element too - you may get stuck with the cheaper goods if the market is dropping and yours don't sell quickly enough.

But at this point in a new expansion, prices are still pretty high and quantities of herbs, ores, leather and silk is dependent on people still leveling. There aren't many farming routes established yet and most players are spending time leveling, not farming.

As you can tell from my previous two posts, I started my herbalist in Highmountain because Foxflowers were the most expensive herbs at the time (not including Starlight Rose though). I did post a small area that is pretty good for farming Foxflowers but it's not an efficient way to do it.

So what I did to make the most gold from Foxflowers was to reset the market. Prices drop over the weekend to 20g or so but during the week, they are regularly at 30g or more. When I saw a bunch of Foxflowers at 9g, of course, I snapped them up and I also grabbed all the Foxflowers upto about 18g. Luckily I remembered to take a screenshot just before I bought the last cheap Foxflower!

They all sold at 30g or more so I made a tidy profit on those.

Today I had a brainwave when looking at Stonehide Leather - I noticed that there were a couple of bid only lines so when I went to check the prices on those, they were about the average market price but what I did see at the top end of the price range was a huge discount for a bid price. Basically someone had overpriced their main buy price so they were never going to sell but their bid price was actually below the market price by about 3g. That doesn't sound like a huge profit but I snapped up 4 stacks of 200 leathers at an average price of 9g30s when the market price is over 12g50s.

I'm pretty sure I could sell them all very quickly if I wanted to but I actually want them to level up my leatherworker so this way, I have comparatively cheap materials to do so and if I make the right items to level up, I can also sell them and have a lower base price than my competitors.

You can reset all sorts of markets but I tend to play it a little safe and stick to profession materials. It doesn't have to be the current materials either - I'm resetting Living Steel and Golden Lotus markets too - I'm not sure why those markets are still so active but I'm not going to complain!

Where to Find Foxflowers in Legion


Last time, I recommended starting your herbalist in the Highmountain zone of World of Warcraft Legion because of the value of Foxflower. Well, I have to say I may have been a bit premature with that statement! It still holds good unless you are an alchemist as well, in which case, you will find that your opening Alchemy quests all take you to Azsuna.

One addon I would really recommend you installing is the Gathermate2 addon - I used to use Gatherer but as of this week, it still hasn't been updated for Legion herbs. I was slow to install this addon so although I picked Foxflowers all the way through Highmountain, I don't have a record of where they all are! I fixed that for Val'sharah and Azsuna though!

One other thing to note is that if you do start with Highmountain to take advantage of the high Auction House prices of Foxflower, it is worth keeping 60 back for your Alchemist. This is another thing I messed up on so I had to go all the way back to Highmountain to pick them for my Alchemy quest! Without the Gathermate2 information, it took a while to find a good spot but I eventually found this little area in the north to be the best for picking Foxflowers.

There are lots of murlocs around here and a bunch of crab type NPC's that wander in groups so you will have to fight your way through. On the far eastern edge of the range are neutral murlocs so if you don't feel like fighting and have time, you may find enough Foxflowers in the safe area to keep you supplied.

One of the biggest changes to herbalism in Legion is the fact that each herb now has a rank attached to it so when you pick your first Foxflower, you get a simple quest to pick more Foxflowers but the quest will take some additional quest items each time you pick, then asks you to return to the Herbalism trainer in Dalaran. Once you do that, you learn rank 1 Foxflower which increases the number of herbs for each pick and the trainer gives you another quest to learn rank 2 and later rank 3.

I was also slow to do the herbing quests so I had almost finished Highmountain before I gained the rank 3 skill. But I realized halfway through Val'sharah what was happening and jumped on the herbing quests as soon as I got them! It definitely improved the number of herbs I received each time I picked too.

Next time, I'll tell you about all the fun I'm having leveling my alchemy profession! 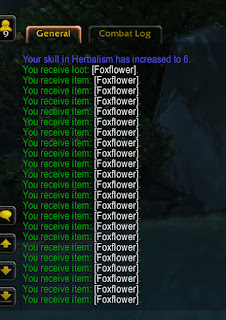 I started my herbing alt in Highmountain after checking the prices of herbs in the Auction House. Foxflower was selling at the highest price by a large margin so I figured that was a good a place as any to start my Legion adventures.

What I didn't know was that when you pick a Foxflower, there is a chance of it spawning a ghg fox which runs around nearby and drops more Foxflowers. All you have to do is run over them to collect them. Sometimes that's easier said than done though, especially if a mob is attacking you at the time!

I had 27 Foxflowers from one pick and at 50gold plus on the Auction House, that's a very profitable way of herbing!

Another thing I thought of as I was questing and arrived at Nesingwary's camp, was that I should have brought my skinner here too. As always, Hemet Nesingwary has quests that require a lot of killing of various animals in the vicinity so if you are a skinner, it's an area full of carcasses to be skinned. It's not the best zone for skinning so far and I'm a fair way into the questline but this small area should prove profitable whilst you are leveling through the zone. I wouldn't start my skinner in this area just for the skinning though as most of the mobs have been humanoid. 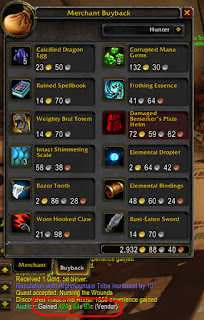 One other nice surprise I had so far in Legion was the value of vendor trash - after just an hour of questing, I vendored all the trash in my bags and made over 400 gold. I'm not saying this is a great way to make gold but as a simple result of questing, it's a nice little bonus.

So what do I think of Legion so far? Well, having got sucked in by the easy leveling during the Invasions, I went from one level 100 to 4 level 100's, a 95, two 90's and of course my new Demon Hunter at 98. There's also a level 100 boost waiting for a decision to be made - I'm leaning towards a Shaman for the boost as I don;t have one yet and although learning a new class at level 100 might prove difficult, it can't be any harder than playing a Rogue who was left at level 83 in Mists of Pandaria for the whole of the Warlords of Draenor expansion!

I'm enjoying the leveling process so far and I'm taking my time  - yes, I'm still spending a bit of time in the Auction House but for now, that's just a start and end of playtime activity. I'm not sure how much goldmaking I'll be doing but as I come across ideas and feel the urge to write, I'll be popping them here as quick tips. You can also keep up with my doings on the podcast - The Journal of Marcus Ty. Marcus talked me back to joining him for our bi-weekly chat about goldmaking in Legion!

If you have any tips or questions, feel free to drop me a comment below.