And Now For Something Completely Different...

So today I have exchanged posts with some of my fellow gold bloggers. Epidermuss at WragstoRiches has written this post for us here today & I have written a post for Gimp over at GimpsGold. Follow the trail of links to see who else has joined in this little blogging adventure :-D

Hi
As many of you will know when you are levelling a character in World of Warcraft, bag space plays a key part in your ability to keep on questing or running dungeons, without having to stop and keep visiting vendors all the time.

The common philosophy among players and bloggers has always been to go for Netherweave Bags. These are 16 slot bags and are Bind on Equip. The reasoning behind this is sound, as you get 16 extra slots per bag space for generally between 8g - 16g on the realms I have experience playing on. Which at 8g a bag is 50s per slot or at 16g is 1g per slot compared to Frostweave bags during WotLk which where from 75g - 100g per bag for 20 slots. This works out at 5g per slot at 100g a bag or 84g for the extra 4 slots per bag space.

Personally I never followed this idea though, and there are several reasons for it.

- If you start a character then decide you don't like the class, a Netherweave bag can only be sold to a vendor as it becomes Soulbound as it's Bind on Equip.
- Every new character requires new bags.
- Its vendor value is only 1g

I prefer to equip new characters on new realms with Runecloth bags. These bags are 14 slots and generally cost around the same mark as Netherweave bags, but crucially can either be re-used on different characters or sold on the auction house once you've used them.

On my mains realm when I first started playing, it was towards the end of Burning Crusade and I bought 8 Runecloth bags for a grand total of 10g or 1g 25s each, which was a lot of gold for me at the time. But I still have these bags and my low level alts are currently using them now. This shows how re-usable Runecloth bags are.

Now with the addition of Cataclysm, Blizzard has added the possibility of buying faction specific 16 slot bags like the Ironforge Bag. These are available for the cost of 2g and you can buy one from each respective main home faction. So you can buy 6 for either horde or alliance, and they are available at revered with the respective faction. That's 8g for 64 slots to fill your bags slots on your character or 12g to buy them all so you can purchase two extra bag slots in your bank, giving you an extra 32 slots in your bank also.

Now with the way the levelling zones have been redone and the ability to wear tabard's for your home factions in dungeons it’s got a whole lot easier to get bag space.

So if your starting new characters on new realms or just new to the game when you go to the auction house to buy bags, stop and think about your purchase before you waste gold you may not have.

BOO! Guess Who's Back?

Yup, I finally surfaced from my dungeons & battlegrounds long enough to realise how long it's been since I posted here. As I said in my last post, I'm loving my Hunter! Why it took me over a year to actually get her levelled is beyond me but I am so happy that I got there eventually.
So I guess I should give you guys an update of my summer gold making although to be very honest, it's been more of a summer of gold spending. Once I hit my 1 million gold, every bone in my body decided to rebel & make me start spending rather than being the miser I had been whilst trying to reach my target. I thought I'd list the stuff I know I bought
2x Witch-hunter's Harvester - 25k
3x Mekgineer Chopper - 45k
1x Traveller's Tundra Mammoth - 16k
1x Ring of the Kirin Tor - 6k
1x Masterwork Elementium Deathblade - 13k
1x Lava Bolt Crossbow - 25k
4x JP boots - 2.5k
1x Claws of Torment - 7k
1x Chelleys Staff of Dark Mending - 13k
So that's at least 152k without any smaller bits like pets and levelling professions but even without really trying, I've managed to keep my gold balance around the 930k mark. Regular readers will know I lost my MySales data just a day or two after I hit my goal, so I thought I'd show a screenshot of what's been selling since. It shows just about 2months of data now.
I stopped glyphing almost straightaway - the few that show up on MySales are the remnants of stock & I slowed down on the cut rare gems too. Mostly I've been doing a lot of questing at all different levels (my new shaman is now 55 & my forgotten Druid just hit 62) so I've been selling all the drops & mats that you normally pick up. 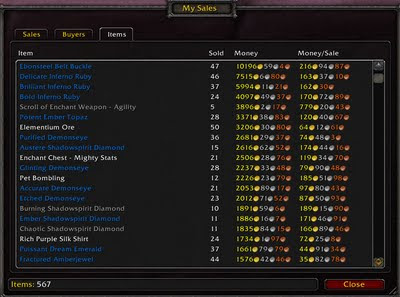 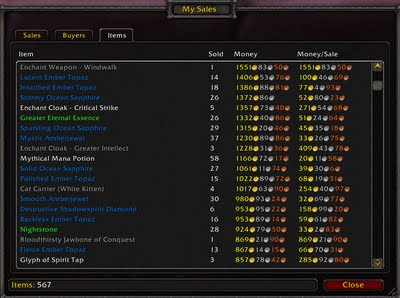 On 1st September, I did have a massive tidy up & craft session - trying to clear down my bank junk & bags. I had a fair few Cataclysm enchanting mats stashed so I made up a whole bunch of high level scrolls - not a market I am very familiar with but I did get some nice profits. I also returned to the glyph market & cut rare gem market - glyphs have really slowed down over the summer, it seems but the gems are still selling fairly well.

I now have alchemy & tailoring maxed on my Hunter so I have double transmute & dreamcloth cooldowns available. My Hunter is about the only alt I have capable of getting Chaos Orbs so perhaps I should have put something other than Tailoring on her but hey ho! We'll see how this goes for now.

So that's been my summer, slow & relaxed on the gold making front but absolutely manic on the questing/levelling/dungeoning front but you know what? I think I needed it.

I have a few ideas lined up for regular post slots here & I've changed my day to Tuesday over at Goldgrubs (it's tough writing when hubby's home!). There's another project in the works which I think is launching this weekend. Gimp over at GimpsGold is organising a Golden Circle - you'll have to wait a few more days to find out more but I think it has great potential for all of us, bloggers & readers alike, so stay tuned!
Posted by Nev at 11:07 No comments: