Hellooooo! I was very surprised this morning to see that it has been almost 2 weeks since I last posted. Time really flies when you're levelling 2 alts & finally experiencing the Cataclysm heroic dungeons! I got my hunter to 85, an alt that was born during last summers' huge guild drama as an escape has finally made it to level cap. I already have 4 level 85's but although I'm an ok player ability wise & a good player attitude wise, I've never really managed to get good dps numbers out of them.

My hunter has changed all that & having the gold reserves that I do, I was able to buy the Lava Bolt Crossbow, Witch-Hunter's Harvester & the JP boots for her the day she dinged. I also - like any good goldmaker - had the mats in stock for the Corded Viper Belt & some Justice Points saved up so I could get my first JP piece. Add the Thrall questline cloak & the initial Firelands vendor piece & I was off to my first heroic Cataclysm dungeon the same afternoon!

Now that may be quite normal for many of you but I've actually only completed 2 heroics on any of my girls up til now & two of my four 85's aren't even geared enough to try so for me, personally, this was a major step forward. So far, since Thursday, I've now done 6 or 7 heroics on my hunter & her dps numbers have given me the confidence to try HC's on my healer too. I'm still a little way off being able to do the Zandalari dungeons but that's my next target.

I know many goldmakers manage to raid/do Heroics etc whilst making gold but for me, it's one or the other for now. That's just the way my brain works. At the moment, it's full of stat priorities, rep grinds/rewards & reading everything I can find to help my performance. I 'm still doing some gem selling to fund my daily costs but as far as gold making goes, that's about it.

Having said that, I'm not quitting this blog. I fully intend to come back to some proper gold making soon but rather than just disappear for a month or more, I wanted to let my readers know.

So for now, my plan is to resume serious gold making & blogging about it in early September. I'll still be posting on my regular Wednesday slot over at Goldgrub's & I can't break the habit of reading all the new posts each day from the other gold blogs on my blogroll. If you have any gold making questions or just want to chat, I am still checking my email & twitter regularly as well as the comments here so I'm not far away.

Anyway, I've waffled on long enough, so I want to thank all my commenters & readers who've kept me going this long & I wish you all happy goldmaking for the rest of the summer. Take care & I'll catch y'all soon

It's been another lazy, slow week at the AH for me - I've been levelling my hunter with a guildie (or should I say, trying to keep up) & I finally got my 1 year old warrior to level 80. I have made a little more effort with rare gems this week but the whole sense of urgency to cancel/relist multiple times a day has definitely gone on vacation!
Having said that, almost 25k income is pretty good, I think. I've done a little prospecting as my Inferno Ruby & Ember Topaz stocks have almost disappeared & I even had to transmute some Nightstones to get more Demonseyes!

The meta gem cuts have leapt up in price this week so I made some more of those with my alchemist & cleared down a few stacks of the uncommon gems in the process. This was probably a good thing as it made space in my banks - I picked up around 250 stacks of Elementium Ore this week at around 35-39g a stack.
Why did I buy all that? Well, the price for Elementium Ore has been fairly steady at 65g or more so I wanted to clear the cheap stuff off the AH before everyone decided that was the price to list at! By trying to keep the price high-ish, I'm hoping my gem competition will have smaller profit margins and/or be eating into their stockpiles.
This is a bit of a new direction for me - I used to only buy what I knew I could process quickly but I was subject to the same price fluctuations as everyone else. This way, I know I have cheap ore that I can prospect, smelt & use in Blacksmith stuff or turn around & sell at the higher price! As you can see below - I did sell 50 stacks & pretty much doubled my money on them too.
Other odd bits from my sales data shows that I finally managed to sell my first ever top end enchant - Windwalk for 1551g - disappointing but still a small profit. The prices for maelstrom crystals have dropped to around the 100g mark so the prices of these enchants have dropped too & I've had this scroll listed for almost 3 weeks. I don't think I'll be making many more of these, that's for sure! 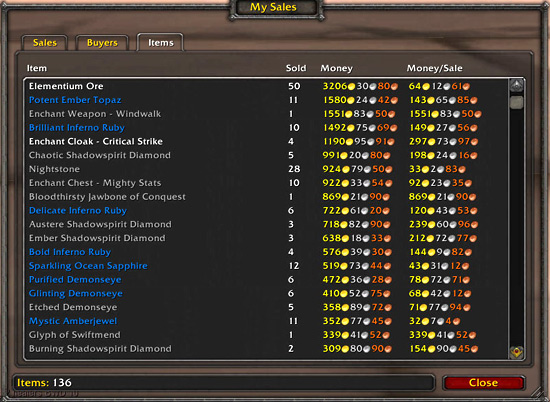 The rest of my top sellers are mainly rare gems as I would expect - I've completely left the glyph market other than a few stragglers still to sell. Other stuff that has been selling regularly includes the Rich Purple Shirts (78g each), Mechanical Squirrel Boxes (35g each) & Pet Bomblings (135g each).

With all the levelling I've been doing, I've also picked up a fair few bits & pieces to sell - chilled meat, rhino meat, frostweave cloth, green quality armour as well as lower level cloth like wool & silk from one of my lowbie alts.

One thing I did do this week was to clear the AH of a lot of very low level green armour & weapons - why? Well, Khalior did a great series of posts this last week or so about how a social member of raiding guild can contribute & make a bit of money too (although that's not the main point of it). The one I picked up on, was the Guild achievement for disenchanting items. I set my buyout price at 1g per item & have been checking sporadically for items to disenchant. Not only is the achievement counter climbing nicely but as he points out, I am making a bit of gold at it too & hopefully, by buying the low level crafted items, I am helping build gold for new players just levelling their first professions!

So that's my week - lots of actually playing out in the world & a bit of AH'ing. I still feel a little 'lost' & directionless but I needed the break. This coming week, I'm hoping to get my hunter or warrior to 85 (maybe both, who knows!) & start running some dungeons with them.

I also have most of the herbs needed to level a second alchemist which will be my Hunter so it will be interesting to see how the levelling products sell. I'll be taking notes as usual & reporting back here eventually!
Posted by Nev at 10:50 2 comments: