I was a little ways into writing this post when the news hit today - Mists of Pandaria official release date is 25th September! Yay! Eeeeek! Why eeek? Well I was hoping for a mid-October release to be honest. I have a lot of RL stuff to do over the next few weeks which is going to slow down my final preparations for Mists, not least of which is to get my little warlock leveled to 85 as soon as possible now.

But in the meantime, I thought I'd restart tracking & discussing my weekly sales. It used to be a popular post when I was writing more regularly last year & it will be interesting to see how things have changed & will change now going forward. These screenshots represent about 25 days of sales upto the 22nd of July so I'll be posting updates on Mondays (if everything goes to plan of course!). I forgot to make a note of my gold balance but having treated myself to a few expensive mounts, it's under 500k now.

Luckily I'd already made a start on clearing out all the accumulated goodies (aka rubbish) in my various banks to make space. I've also restarted my glyph posting which as you can see from my screenshots, is going quite nicely thank you very much!

I'd also hoarded a fair bit of Netherweave Cloth so I joined in with the bag market although my attempts to push up the price a little has been fairly futile! Another oldie but goodie source of healthy profits is the Enchanted Thorium Blades being disenchanted for Greater Eternal Essences. At 45 gold each on average, I have managed to raise the price a little although it does tumble back down regularly. I just dip in & out of that market when I like the prices. With the removal of thrown weapons in Mists though, we're going to have to find an alternative cheap source for GEE's - Cold over at Cold's Gold Factory suggested the Wizardweave Turban from tailoring when we spoke about it on the new Gold Bloggers On Air Hangout - a new venture.

One of the newer bloggers, Brandon, managed to herd a bunch of us gold bloggers together on a Google+ Hangout & you can watch & listen to us nattering about gold making over on his blog - Goldshields.  We're hoping it will be a fairly regular thing so if you have any questions or topics you would like us to discuss, leave a comment over there then join us for the next one and of course, you get to hear my British accent :P 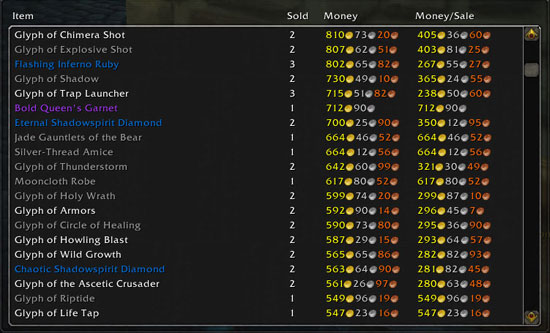 One of the nice surprises from my bank clearout was the Arctic Furs - averaging 68 gold each, they are almost at the price they were in Wrath, if I remember correctly. I guess the boom in chopper sales & leatherwork being leveled for the expansion has something to do with that!

I was disappointed with 600 gold for the Mooncloth Robe I found in my guild bank - when transmogrification first hit, I was able to sell a few at 1200 gold each but then I moved away from game & everybody else set the various prices.

Another change coming in with Mists of Pandaria is the enchanting rods - everyone will only need an enchanted copper rod - this is disappointing news for those Blacksmiths who make tidy sums of gold selling the rarer, higher level rods such as Eternium or Arcanite. I only had a little Arcanite Bar in one of my banks & I'd already managed to sell it before this information was released. The general Twitter buzz seems to be get rid of it now unless you have the plans for weapons that use it. 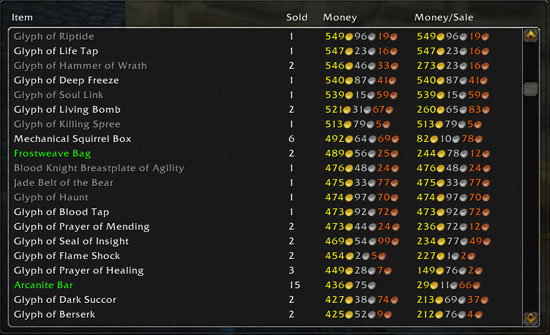 The sheer variety of glyphs selling at high prices has pushed all the other random stuff further down the MySales list but on the first day of bank clearing, I listed over 200 auctions & cleared 4000 - 8000 gold in the first 2 days. I still have 3 more major alts to sort out . Will be interesting to see how much the market changes now with the release date known.

I haven't really sat down & thought through my preparation list of to-do's yet. I definitely want to level my warlock for her Engineering though - I think the new pet battles will make good use of the various Engineering pets but even if they don't, it's the only profession I don't have so it's been bugging me to get finished for a while now.

I also have to re-level skinning - yeah yeah, I know I shouldn't have dropped it but I was racing a guildie to 100 mounts & I wanted the flying carpets so I took Tailoring but I already have 2 tailors so back to skinning for my paladin :)

I'll post my To Do list soon - once I work out what it is myself! What about you? have you got most of your preparation done or are you a last minute panicker like me? let me know in the comments if you like :)
Posted by Nev at 22:37