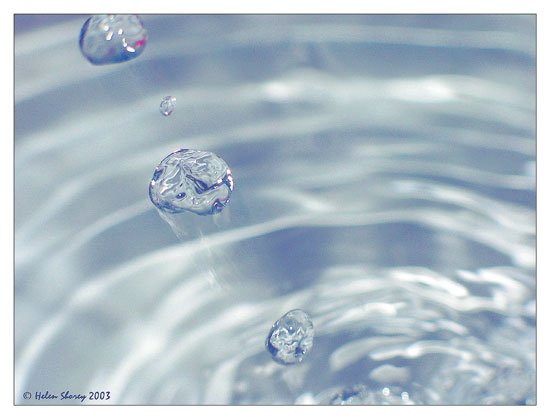 There are 3 main areas suggested for farming Globe of Water, Winterspring, Ungoro Crater & Swamp of Sorrows. Similar to my other 'where to farm' posts I spent about 30 minutes in each area & noted my results. I farmed these on a level 85 for speed but these spots are worth noting if you are questing in any of these zones too. 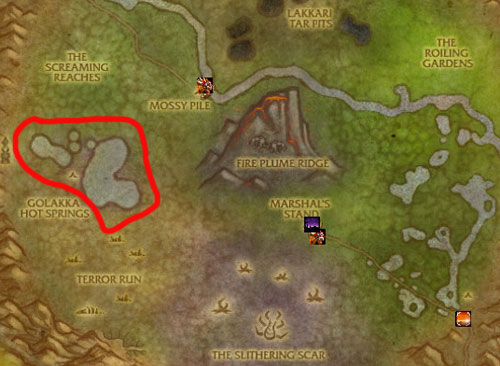 The mobs you are looking for here are the Steaming Fury - water elementals that drop Essence of Water, Elemental Water & our target, Globe of Water amongst other random rubbish & as always, the possibilty of a green item. I didn't have to wait for any respawns but some of them are quite far apart & I felt I was spending more time moving between mobs than actually killing them! Results after 30 minutes weren't too bad though

If you have a miner then you already know that Un'goro is fantastic source for Thorium Ore - just one or two laps around the outer edge of the zone can produce multiple stacks of Thorium. Herbs are in fairly good supply too and if your farmer is a skinner then it would be fairly easy to round up all those lovely dinosaurs & skin to your hearts content.

For pet collectors out there, don't forget to check for the Ravasaur Nest with the Ravasaur hatchling egg - unfortunately it's NOT one of the pets listed as being 'rare' quality for the upcoming pet battles in Mists of Pandaria. Both Cold & PhatLewts have done great posts breaking down the rares list if you want more information. 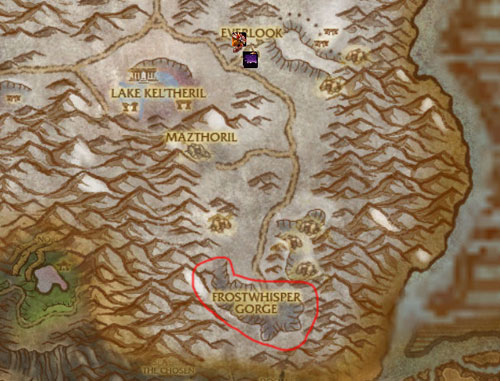 I think the easiest way to get to Winterspring for a level 85 is to use the capital city portal to Hyjal then fly north, unless you're a Goblin Engineer with the transporter thingy of course! Here you will be killing the ice elementals Ice Avatars along the length of the gorge. I found that I could make one run along the whole length then fly back to start point & they would have respawned but it felt very slow & I don't think there are as many mobs here as in the Un'Goro Crater area.

Other stuff found in Winterspring includes the Winterspring Cub pet you can buy from the vendor in the inn at Everlook and as always, plenty of herbs & again Thorium mining is ok here. Whilst you are running towards the eastern end of the Frostwhisper Gorge, look out for a grell vendor - he sells Gromsblood so you may as well snap that up each time you pass him. 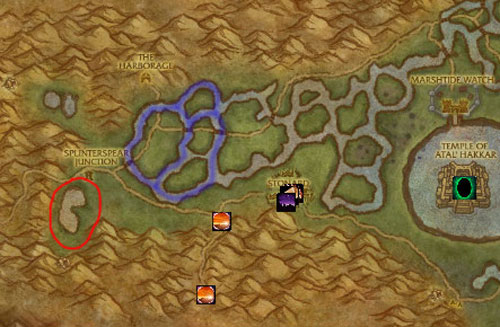 I like Swamp of Sorrows for several reasons, not least of which is its proximity to Stormwind. For this farming post, we will be killing Purespring Elementals around this small pond/lake area in the western part of the zone, marked in red.

I have to say, this originally gave me similar results to the Un'goro area but when I revisited it last night, I had beaten all 3 zones results within 10 minutes! I have previously spent a fair bit of time here, herbing & mining. Originally I tried farming for one of the whelpling pets but that changed after cataclysm hit.

I also pick up some gems (Aquamarine & Star Ruby), a Formula Enchant Boots - Spirit & 3 green items - one of which was the Lord's Breastplate - a mid range mogging item.

Other stuff in the zone includes plentiful herbs & Thorium Ore. This is also the place to farm for the Disgusting Oozling pet. I've marked the area in blue where you need to mindlessly kill the Shifting Mireglobs to gain their Oozing Bags. If you are lucky, the Disgusting Oozling may drop for you. I tried it last night for 30 minutes & received 19 Oozing Bags - no pet this time though, sadly. The Disgusting Oozling is on the list of Rare pets for pet battles so it could become even more valuable once Pet Battles come into play

So there you have it - if you need Globe of Water or Essence of Water, I would have to say Swamp of Sorrows is the place to go. Why would I need to farm these? Well on my server at least, both are either fairly plentiful but highly priced or non-existant! They appear sporadically on the Auction House & I want a regular supply. I use the Globe of Water for the Engineer made Mechanical Yeti pet. These have been selling fairly well for a while but with them not being on the rare Pets list, I am kind of expecting sales to drop off a bit.

Essence of water was a new one to me - until I read Soco's post on her daily routine! I had never realised that there was a Transmute Essence of Water to Essence of Air before & with 2 transmute alchemists just doing Living Elements transmutes sporadically, it seemed silly not to make the most of them. I'd been farming Essence of Air in Silithus when I felt like it but not any more!

Do you farm these items or just wait for them to appear on your Auction House? Do you have any other spots you'd like to share? Let us know in the comments if you'd like to :)
Posted by Nev at 11:36