Just a few days late this week with the post and the screenshot is from 19th so just a day late with that! Don't think it would have made much difference & my addon is set for 7 days so it still only shows a week's worth of transactions! I do have a very good excuse though - I spent a huge chunk of Sunday installing TSM2 & reworking all my auctioning & crafting groups. It was kind of nerve-racking but with the help of Phat Lewt's video series, I quickly got the basics sorted out. He covers all the modules, each has it's own video & he's kept the videos to around 7 minutes each - perfect for me - all the info without time to get too confused or bored!

So this week, I'm finally seeing some different items in the top section of my sales list - I've stopped making the leather & mail PvP items and have almost sold out of those now but instead I'm cutting gems & making some enchant scrolls. I did pick up a boatload of very cheap Windwool Cloth though so I have made a few of the Cloth PvP items - just to keep the gold flowing!

But the big seller this week is Mysterious Fortune Cards yet again! Until last night, anyway - Monday evening I did a deal with a player & bought 2000 MFC's from him for 5g a piece, knowing I was selling them fairly easily at 15g & I wouldn't have to mill for ages yet! Then last night, a different player decided to drop the market down to 8g a piece & list 100's of them. Now I could easily buy him out too but I reckon expecting these guys to stay out of the market would be pushing my luck so I'll just hang on to them until my competitors get bored of milling! I did manage to shift 3-400 before they dropped the price though so that'll show up in next weeks post I reckon!

One nice side effect of all that milling though is the production of Starlight Ink as a by-product. I've turned those into the 4 types of Shoulder Inscriptions & they are selling nicely too. I've not been paying attention to my scribe so I don't know if that's the best use for them but for now, it'll do! 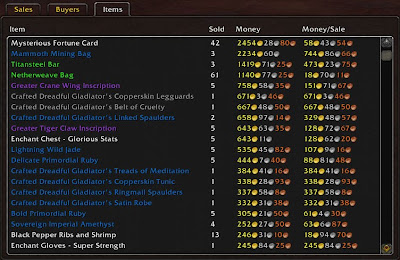 I wrote a post a while ago about Titansteel and as you can see, I moved a few bars again this week. They've been dribbling out in 1's & 2's but nowhere near as fast as I'd hoped. Having said that, my server is still pretty dead, I think I'll hang on to them until the Connected Realms thing happens after patch - more people using the same Auction House should shift things in general, I hope.

I'm still learning new gem cuts on my Jewelcrafter but I'm cutting & selling gems too. I haven't started major prospecting yet though - my stash of Ghost Iron Ore isn't going anywhere for a long while yet so I'll prospect as the mood takes me or I run out of gems to cut! It's nice to see some gems making it to the top of my sales list though - Haven't seen that in a long while!

Had a run on Netherweave Bags this week too - I had picked up a load of Netherweave Cloth for around 3g a stack & I finally got around to converting it to bags last week. Cloth is back up to 15g a stack now & the bags are around 18g - just not worth the effort this week so I'll do my usual and wait patiently for the prices to fall again!

And that's about it for this week - next week's post will be the first full week of using TSM2 to craft & create auctions. I kind of like it already but I have a lot of tweaking of groups and operations to do yet so it will be interesting to see if there's any effect on my sales report next time!

Image © Markles55 under Creative Commons licence
Posted by Unknown at 20:55