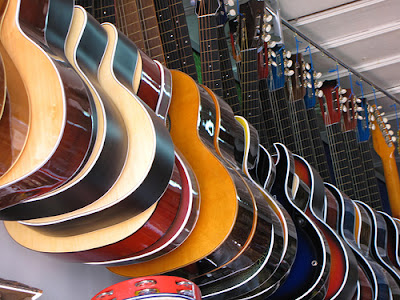 What a wild ride it's been this week! Not that my sales really show it but I made a couple of great deals early in the week & they should start paying off over the next week or so. I also found a gold mine in one of my banks so all in all, it's been a pretty good week!

Over the last few weekly reports, I've been banging on about Mysterious Fortune Cards and oh look! there they are again at the top of my earnings list! This week though, I've had a lot of competition from 2 people selling them at 7-8g a piece so to start the week, I just slowed down & thought I'd wait them out. Well, until I saw that one of them was trying to offload all his stock at 6g each in the trade channel! I quickly logged a different alt and whispered him - he had 1600 cards. I hesitated so he dropped his price to 5g each at which point I snapped them up! He also offered me the Starlight Ink he had so I grabbed a couple hundred of those too - at 20g each which is less than 50% of the current market price. I've been selling the shoulder inscription scrolls quite well so I thought I'd soon shift the inks too.

By Wednesday evening, the other cheap MFC guy had sold out or gone AFK for a while so I listed 400 cards in various stack sizes & actually barked a couple of times in trade. You can see the results in the screenshot - all 400 sold by the next morning at 16g each! Happy Nev that day.

I've also been doing a bit of prospecting & gem cutting - now that I'm using TSM2, I seem to have got the bug again - I think the challenge of making it work has given me the spark back for now. My server is still slow though so I'm not shifting gems at any great pace - I'm hoping the Connected Realms will help to fix that though! 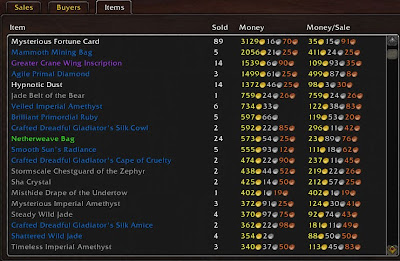 I've also been picking up more & more of the 83/84 MoP Green Armor - buying any below 50g and reselling them for 199g or 225g. The usual Mammoth Mining Bags & Netherweave bags have been selling - although Netherweave Cloth seems to be getting more expensive these days. I can wait though - I'll just snatch the really cheap stuff & make bags in batches when I remember.

So what's this goldmine I found in my Rogue's bank? Cataclysm uncommon gems - 100's of them I'd totally forgotten about! I popped over the the Auction House to check the price of Hypnotic Dust. At 8-10g a piece, I decided it was worth the time to convert all those gems to rings & necklaces to disenchant. Above you can see some of the result - almost 1400g in one evening and I still have about 10 stacks of Dust to sell! That was a nice little bonus this week.

As an update to yesterdays Leveling Leatherworking post, I can now report that the enchanting materials I got from disenchanting all the low level stuff has netted about 2700g so far and the MoP green armor which I decided to sell has netted about 1300g so far. After an initial outlay of about 4200g to buy all the leather I needed, I've regained about 4000g so far and I still have some materials & armor pieces left to sell. I think it's just about paid for itself already you know :)  Now if I can just do the same with Engineering I'll be really happy!

Image © CapturedMoments1 under Creative Commons licence
Posted by Unknown at 21:11