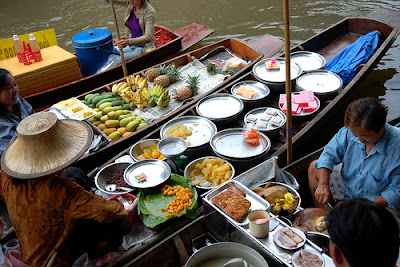 Yet another week of slacking here at Casa Nev & no good excuses either - unless you count my dearest getting me hooked on the crack-game that is Candy Crush! It turns out I'm a lot more competitive than I realised and getting ahead of my Facebook friends & staying ahead of my fella has become addictive!

But I did manage to branch out a little this week so although my overall sales are pretty dismal, there is hope on the horizon for 3 new markets! As you can see from the screenshot, Mysterious Fortune Cards are still selling well & as a by-product of those, I have a few stacks of Starlight Ink accumulating. I decided to try the various Shoulder Enchants and have been pleasantly surprised by those selling well. I tried selling the basic inks too - the prices are such that 3 for the inscription is roughly equal to 3 raw ink - but none sold so I guess I'm not the only one trying to use them up somehow!

I also dipped a little deeper into the cut gem market - still no huge volume - either posted or in sales but a wider variety of cuts sold this week. Prices aren't too horrible but they're not great either - luckily the bots seem to be back & Ghost Iron Ore prices are staying around the 40g mark. I just need cheap Golden Lotus now to transmute some of the piles of rare gems that are building up. I could do the whole Jewelcrafter/Disenchanting thing but for the moment, I really can't be bothered! 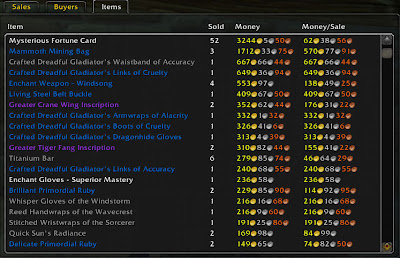 Talking of Enchanting - I actually made some scrolls this week & they've been selling too! Again, I didn't dive in deep & the prices fluctuate wildly so I still have some learning to do in this market. I also had a couple of posts ideas so watch for those in the next few days!

In other news, I've almost stopped selling the PvP crafted gear - mostly because I'm trying to build up my stock of Magnificent Hides and because with patch 5.4 seemingly so close now, I've noticed sales slowing anyway. I really don't want to be left with a lot of this PvP gear once the new stuff is released! The Tailored PvP gear hasn't been selling for such good prices so I'd stopped that a week or two ago as well.

And that's about it for last week really. The Mammoth Mining Bags are selling but slowly & I've snagged a few of the level 83/84 green armour items for less than 25g so those are showing up on the bottom of the list too. I did make up 60+ Netherweave Bags on Sunday so I'd take a wild guess & say they'll be showing up on next weeks report!

Have a good week everyone - enjoy your gold :)

Image © TommyKwok under Creative Commons licence
Posted by Unknown at 19:13