It's been a bit of a weird, hellish week but I did manage to put another 5 levels on my baby priest - she's growing up now though - level 35! Woo hoo! I have been asking myself why I chose a priest to level for this. Although the questing is more straightforward than it used to be, it still feels very slow - I think it's the lack of heirlooms, the seemingly long cast times & of course, I'm horde now so I get lost more often!

Being Horde though, I knew about the battered leather set that they could buy from the vendor in Silvermoon - so in the absence of any pretty dresses, my little warrior banker went for the sexy red leather! Not a transmog, she is only level 5 but nice for running around town anyway.

As for the Auction House - well you can see from the screenshot, I broke through the 1000 gold mark to almost 1600 gold now. I had a lucky drop of Silver-thread Boots which boosted my total almost 200 gold - probably should have gone higher but the Auction House seems very quiet these days The Dalaran Wizard's Robe also helped boost my total but that's been hanging around for weeks. Nice little boost but not really something to try for when leveling. 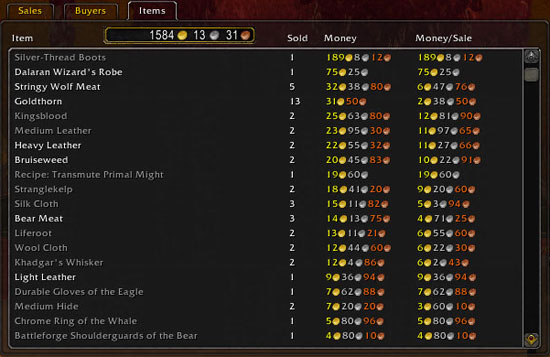 I also made a boo-boo by listing my Goldthorn so cheaply - I have some listed at the moment for around 10 gold each - selling at 2 gold something was guaranteed income as someone snatched a bargain almost as soon as I listed them.

I've managed to keep my herbing & skinning almost at the correct level for my questing area - I'm in The Hinterlands area right now - did I mention I hate those darned troll ruins - up & down, one or two quests at a time then kill all way back up to do the next couple of quests then back down again, rinse, repeat, try not to scream in frustration too loudly & not even a blue quality quest reward at the end of it all - arrgghhh!

Anyway, not sure how far I'm going to get with this for a while. Real life sucks big time at the moment, stealing not only playtime but inclination to play, even when I have the time. It is one of my easier little projects though so I hope I can keep going. Stay tuned to find out if I do :P
Posted by Nev at 21:19