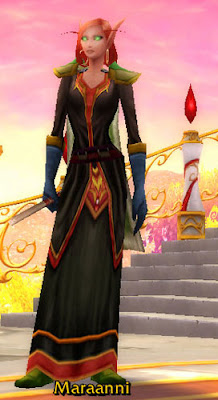 I've been barrelling along, leveling my herbalism & skinning as well as questing. I decided to brave the random dungeon finder last night - ugh! Have I ever mentioned how much I hate pugs? Well, I do - a shaman healer decided to roll need on a cloth intellect waist even though he was full on heirlooms & I had only crap quest gear. For once I stood up for myself & queried it but I did pretend to be a bit noobish just in case he got nasty! lol

After the tank spent the next 10 minutes reposting recount scores after each fight, I think the shammy took pity on me because he traded me the belt! Yes, my DPS was that bad! But I did get a pretty new dress after I left the dungeon, I just finished a quest chain so that made a huge difference and it kind of matches her hair too :) Shame about the gloves & boots though. 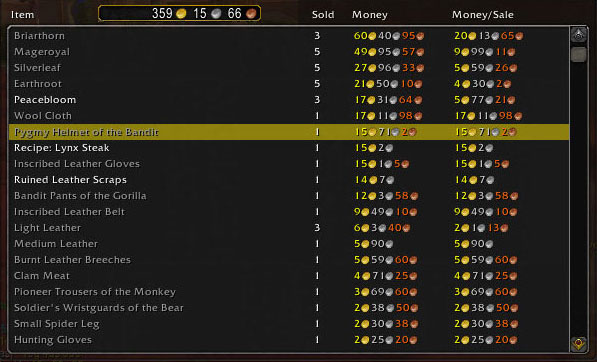 One thing I have found out is that keeping my herbing & skinning leveled to the zone I'm questing in, is a bit of a pain! I spent about 2 hours questing & dungeon last night but over an hour or more, trying to get my skinning up to a level where I could skin the beasties I was killing! Having said that - skinning on a priest? Seriously, WTF was I thinking??? lol

But on the other hand, I did end up with several full bags of herbs & leather as well as a few green items which mostly all sold overnight. I've just pulled almost 200 gold out of my mailbox this evening, giving me a nice current total of 359 gold. Out of that, I've bought 3 netherweave bags & a couple of items for my priest to wear as well as paid for my riding skill & sent 30 gold to my priest for pocket money. So at a rough reckoning, I think I'm upto about 440 gold overall if I hadn't spent anything.

Now I know that may not seem much but remember, this is my non-goldmaking experiment :) I'm trying to think like a new-ish player - just selling everything I pick up from questing & the odd recipe here & there when I find them.

I'm going to try to get to level 30 tonight & dual spec into Holy - I have an 85 Holy Priest but I never did lowbie dungeons as a healer so I thought I'd give it a try this time through. Wish me luck - I think I'm going to need it!
Posted by Nev at 21:58