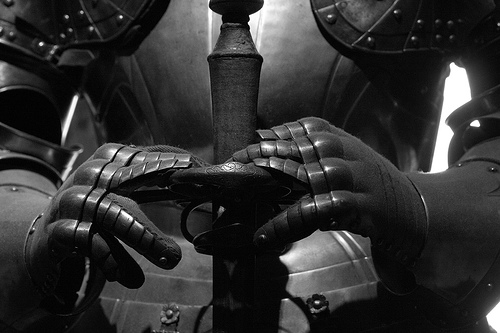 I haven't done a weekly report for a few weeks now as I had almost stopped playing the Auction House on my main server whilst I focused on my 30 Minutes a Day Project. I've also started a baby Warlock for some strange reason - I say strange as I already have a Warlock sitting untouched for months at level 52 but hey, I'm enjoying it for now & I'm actually in game, playing an alt!

I did however get my crafting butt into gear a little bit last week and made some bits & pieces to sell - not much though. I'm still kind of in the doldrums right now and being off work for three weeks due to recuperation and Xmas hasn't really helped. But both are just temporary setbacks so I've been planning the start of the New Year whilst laying in bed and letting my body heal itself.

One thing I did do this week was to look again at some old, tried and tested markets, just to see if they were still viable or had returned to their former lucrative glory. The Mysterious Fortune Card's have been taken over by idiots in my absence from the Auction House and when they aren't sitting there at 25g each, they are flying off the shelf at 7g each! I got into a bit of an undercutting war last week with one player who messaged me and offered me his stock of cards for 12g each. I still managed to shift a fair few before he did though! 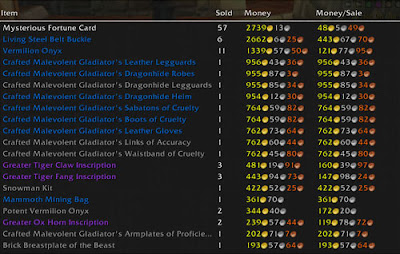 Now that was a bit rich for me so I said no but we did get chatting and as I'm not that bothered about ruling the market, I understood his frustrations and decided to let him have the market to himself. Today I got lucky and saw a bark in trade from a different guy wanting to buy MFC's. I messaged him and sold him 1000 cards at about 5g profit on the bunch I bought earlier in the summer! So now I have left the first guy to his market and made a profit on a bunch of cards that were just sitting around in my bank!

I do feel a bit bad though as I've not really honored the spirit of my promise to the first guy. Having said that, the 2nd guy was going to stay in the market anyway and by me pushing his buy price up, at least he will be keeping his AH prices fairly high too which should help both of them.

The other market which seems to have made a bit of a comeback is the level 83 & 84 green armor. I sort of stumbled back into it by just absent mindedly running the various shopping list scans I have set up. When I saw a bunch of ilevel 364 & 377 cloth items for 12-25g each, all sorts of bells went off in my head, so I snatched them up quick and ran through the other armor categories too. 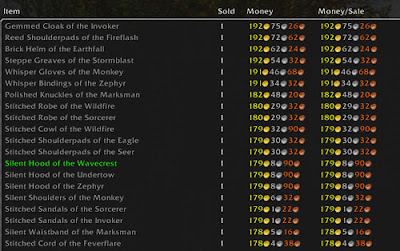 My top buy price is 50g but I rarely pay that much and I resell it all for 189g for level 83 and 199g for level 84 stuff. As you can see from the screenshot of My Sales add-on, the market is still very much alive. All those sales are from this last 7 days alone and all were bought for between 12 - 40gold each - now that is a profit margin I like!

Other markets that seem to be moving again is the Crafted Malevolent pvp gear - mainly the leather and mail as I've been slacking on the cloth and plate stuff. A few gems here and there, epic shoulder inscriptions and bags seem to be about the last of my sales this week. The Mammoth Mining Bag market has also been invaded by an idiot who seems to think that 80g is more than enough. I did buy them up at first but that just seemed to encourage him so now I have a bank half full of cheap bags and the other half is full of cheap Borean Leather which I bought to try to dry up his supplies!

I have no doubt I will make a profit on all this stuff eventually - I have no need to rush after all - but in the meantime, it is frustrating to see such a nice little corner market going to waste.

So that was this last week. Looking forward, I'm likely to be super busy next week when I get back to work after a month off so I'm not sure how much gold making I'll have the energy for but I shall keep listing what I have and I may even try and clear out some of my banks and bags. That will be a trip down memory lane for sure! I hoard so much stuff I could probably power level a profession or two if I needed to!