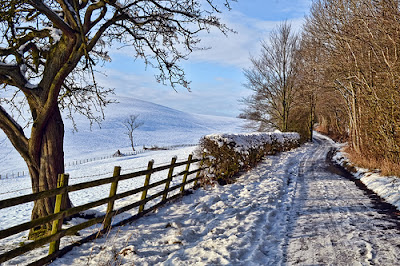 I have hit a small problem & I'm going to have to change my own rules already! That's the trouble with sitting down & writing - sometimes you need to actually do a thing before the pitfalls show themselves!

So, I haven't been able to stick to just the 15 minutes a day then log off idea - I didn't take into account my lovely friends who are so pleased to see me back in game, they all want to talk to me - at the same time! I also didn't take into account how long it takes for me to write down everything I'm buying or listing either so I have found a way around this but you guys are going to have to trust me on my playtime.

Within WoW there is a timer/stopwatch function so rather than doing /played to see how long I have left in a session, I have the timer on my screen. That way, when I stop to chat or write stuff down, I can stop the timer & restart it when I'm actually doing WoW stuff. It does mean that a /played screenshot is meaningless though - I tried it last night - I actually only played for 15 minutes but I was online on that character for about 40 minutes!

Day 4
Day 4 for my banker went much more smoothly than the previous few days, that's for sure! I logged in to find 1g 13s in the mailbox waiting for me but sadly the 3 Peaceblooms were returned. So now that I had a little gold to play with, I ran back to the Alchemist supplies lady in the Mage Quarter & she had a load of herbs for sale. I spent a whole 9s 12c on them, ran to the Florist on the outer edge of the Trade District and he had a bunch of herbs for me too so I spent another 4s56c there.

Off I ran to the Auction House to see what the prices were like. Now that I had some cheap herbs to sell, I felt much better & I was very happy to see the high prices from yesterday were still in force. 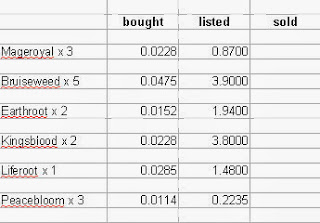 I just had enough time to list them before logging off. Here's hoping they sell at those prices!

Day 5
What a disappointing result - logged in to find only 1 sale and that was the Peacebloom so I'm now 22s24c better off at least. Ran to both the herb supplies places and nabbed some more cheap limited supply herbs but as I had 1 gold already, I ran to the Cooking Recipe guy in Stormwind Old Town too. In the past, I would have bought one of each of all the recipes available but with the changes to leveling cooking in Mists of Pandaria, I just bought 3 of the recipes - Seasoned Wolf Kebab, Crocolisk Gumbo and Crocolisk Steak to test the market.

Did a vendor scan of the Auction House too - only 5 items turned up at 99% of vendor price and all beyond my available cash right now. I'm beginning to think this server has some intelligent AH players on it but I'm holding judgement on that for now! 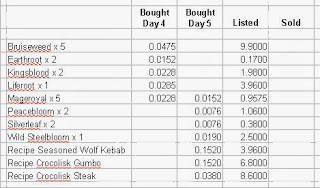 So this is where I left it at the end of Day 5 - you can see how expensive everything is, even this low level herb stuff. I wanted to try a high pop server so I guess I'm learning that huh? lol

Day 6
So I had a few sales today when I logged in - not as many as I had hoped but at least it's a start! This is beginning to feel very embarrassing too - I'm supposed to be a gold maker & 5 days in I barely have 10 gold! So the mailbox gave me 3g74s and a lucky Blingtron drop gave me a further 6g20s. I was a bit fed up today so I just fished for 10 minutes to see what kind of return that would give me. I got my fishing skill up to 50 which netted me a whopping 11s70c! Guess who won't be doing that anymore!

The tips have been coming in on Twitter and via email too although some for now are beyond my cash limit. One conversation with Gimp of Gimp's Gold blog did remind me why I used to like Auctioneer so tonight I'm going to re-install that & give it a try! I'll let you know how that goes in the next update!

As for leveling my Shaman, she's poodling along slowly but I think I'm going to take her out of the 15 minute time restriction. I don't think I'll be playing her for hours on end but 15 minutes questing really is too short to get any kind of visible progress. She's only just got to Kharanos so I think what I'll do is limit her to 2 hours per week. That way it's still a limited time thing but if I feel like it, it's in bigger chunks. I may actually get something done then! Also because she's moving so slowly, I haven't actually had anything to send to my banker from her adventures so that has to change too!