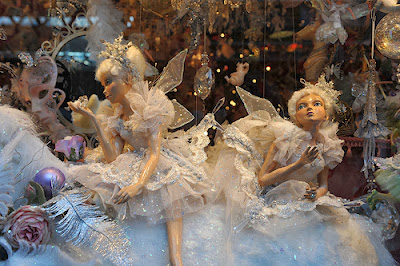 What a good week I've had! I finally knuckled down & made sure to log in briefly almost every day and get stuff listed. It just shows how much difference actually logging in can make!

I decided to make some more Living Steel Belt Buckles as the prices for Living Steel, Pierre the Engineering pet & the Sky Golems are so bad, it really wasn't worth keeping my little stockpile of Living Steel. I'm glad I did because I could probably have sold another 10 or 20 at this price!

The Mammoth Mining Bags have been moving well too - not quite sure how or why but for the last couple of weeks, some guy has crashed the market down to about 80g each. I snatched them up & relisted at almost 500g and mine have sold!

I'm still moving Mysterious Fortune Cards too - again, I'm having to pick my days for listing these as I do have some competition. My server seems to like low prices - I tried undercutting for a day or two but I didn't seem to sell any more that way. I wondered if the volume of sales at the lower price would make up the profit of the higher price cards but it doesn't. So now I'm only posting when the price is above 14g or I am the only one listing. I have plenty of space to store the few stacks I have & I have enough gold sitting in the bank not to be worried about selling them quickly. 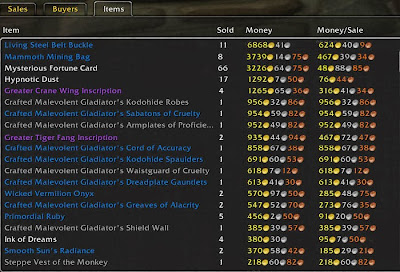 Talking of bank space - I found some Hypnotic Dust tucked away in an alt's bank - when I checked the AH price, it was a rather attractive 12 - 15g per dust so I just couldn't resist that listing! I've also been selling some of my excess Ink of Dreams. I should probably do the maths properly on whether it's worth converting it to Starlight Ink but I don't think it is. I only use the Starlight Ink for the shoulder inscriptions and although they sold well this week, last week they were much lower priced and have been for a while.

The crafted PvP gear is selling nicely - I'm concentrating on the leather & mail stuff as the plate & cloth items are super low priced right now. I have more than enough cloth & ore though so perhaps I should just move it all along my production line & try to boost the prices a bit more - hmmm will have to have a think about that this week.

I've been slow on gems again - for some reason, I just can't seem to get my head a round the gem market in this expansion. I did really well with gems in Cataclysm but the prices seem way more volatile these days & I haven't kept up with all the changes to stats so I'm not totally sure of which gems are best now. Another market that needs a bit more attention I think - I did manage to snatch up about 4 stacks of cheap Golden Lotus - under 40g each which is super low for my server. I think I'm just going to transmute the uncommon gems I have & sell the uncut rares - the prices are more stable so I should be able to recoup my costs with much less risk than crafting the wrong cuts!

I also haven't logged my enchanter this week - I've never really got to grips with enchanting other than the main stats to chest which everybody & his mum is selling these days.

I've been checking some other markets out - keeping an eye on things like Netherweave Bags, Frostweave Cloth & bags, pets, flasks and a few other bits but not much is moving really. I did treat myself to 5 new pets today but I was pretty good and only picked up those below 1000g that I didn't already have! Hopefully next week will show some good numbers too - I have a side project going which should keep me logging in & that can only mean good things in the Auction House!