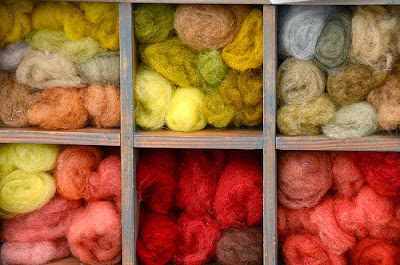 As I mentioned last time, I downloaded and installed Auctioneer for the first time in ages! When I first started my gold making journey, Auctioneer was the one that was recommended to me but I switched off the percentage based display as I didn't like it much. After talking to Gimp last weekend, I reinstalled it as I haven't worked out how to do the vendor search for bid prices in TSM (don't even know if TSM looks at bid prices to be honest) and buying out the very low bid auctions is a great way to get started.

Day 7
I did have to spend a little longer than 15 minutes on my banker today - the Auctioneer scan is super slow but is needed to get the prices into the system. I had hoped it would use the same database as TSM but I don't think it does! Anyway, starting the session with about 10 gold I managed to place bids on a whole bunch of stuff and ran around to get the cheap herbs from the vendors around Stormwind too. I also managed to snatch some cheap stacks of linen & mageweave cloth so before I logged off, I listed everything I had. 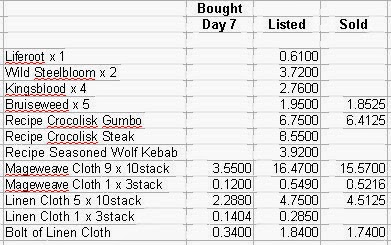 Day 8
Today is a bit of a cheat as I missed a couple of days due to being in hospital! Was nice to see almost 30 gold waiting for me in the mailbox though as you can see from the screenshot above. The linen & mageweave cloth I'd managed to grab really cheaply (about 4silvers a piece) flew off the shelves so today, after I'd run my scan again, I snatched some more linen cloth. I did my herb vendor run & placed a whole bunch of bids.

I've managed to confuse myself with my notes though so the 30 gold received in shown in Day 7 screenie! The screenshot below is as I left the Auction House tonight - everything I have listed and all the bids I have waiting. I also have almost 28 gold in my bags which I should try to use but I'm still pretty tired so I've had to call time on WoW this evening. 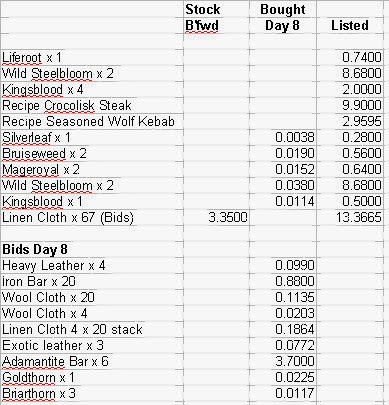 I'm going to try to write up each day as it happens so I hope the variation in tenses doesn't confuse things! If I leave it a few days to write up my notes, I can't read my own shorthand! lol

Day 9
Going to change tactics a little bit today. I've been logging on in the evening for the full 15 minutes and up until now, that was fine but as my inventory grows and I have bids on some items, I feel like I should pop in at least briefly in the morning to see what has sold, what bids I have won & list those and to see if I can quickly find any deals from overnight.

Having so much of my gold sitting in my bags isn't a good idea at this stage either - I need to have it working for me - again either on bids or on items for my growing stock. I'm not going to go crazy and spend it all on one item though even if I'm 99% certain I can double my money on it. It's just not worth the risk to me to bet everything on a single item. I'm risk averse like that and at this stage too, I just don't have the patience to start all over again! I know it sounds strange but being risk-averse and kind of miserly with my spending actually helps me make gold! The quickest way to lose gold is to invest unwisely or to spend too freely after all! 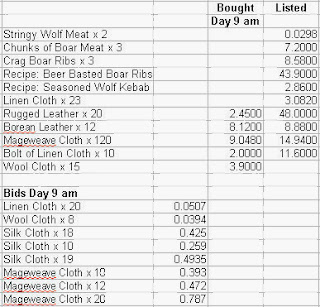 So morning of Day 9, I logged in to find about 13g in the mailbox just from selling the 67 pieces of linen cloth overnight. There was also some gold returned as I didn't win the Iron Bar or the Adamantite Bar auctions. I'd done a bit of leveling on the Shaman the evening before and sent through some bits & pieces of wolf meat, boar meat & ribs as well as 23 pieces of Linen cloth.

A very quick search on the AH netted me a whole bunch of stuff to sell and 8 more bids placed on linen, wool, silk & mageweave cloth. I listed everything as quick as possible and logged off at 8 minutes into my time allowance!

With only 7 minutes left of my time allowance I didn't do very much when I popped into game in the evening. I did squeal a little though when I collected almost 80 gold from the mailbox. Most of the linen & leather had sold as well as a few of the herbs that were still listed from Day 8. I'd also won the Exotic Leather bid from day 8 too. I'd spoken to Marcus Ty briefly earlier in the day & he had mentioned Winter Veil. Now if you don't know, Wool Cloth, Rugged Leather and Small Eggs are traditionally very expensive during this festival so with my remaining few minutes, I snatched up almost 8 stacks of wool cloth ready for the 'boom' of the market next week!

I've added my sales, bid wins and new purchases to the screenshot so you can see where I left my banker at the end of Day 9. I think I'm going to have to find another way to show you what I'm doing though. This post is getting long even by my standards and as I get more gold, the lists of buys and sales will only increase. I also forgot to note down how much gold I had left after buying all this stuff!

Image © Acradenia under Creative Commons licence
Posted by Unknown at 16:00