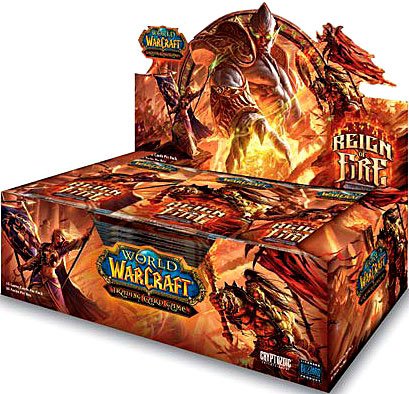 Just over a week ago, Blizzard announced that they would be ceasing support for the World of Warcraft Trading Card Game amidst much disappointment & some surprise. Along with the cessation of the physical cards, Blizzard will no longer be running official tournaments although there are many player-run tournaments so those will probably continue for a while yet.

When they released the amazing Timewalkers - Reign of Fire box set at the end of July, there was quite a bit of excitement over it. The Timewalkers - Reign of Fire box set is pretty unique as it includes all the previous loot cards - pets, mounts & novelty items that were specific to previous expansion sets. They also increased the drop rates so players had a much better chance of getting their hands on some of these rare loot cards including the Feldrake, Big Battle Bear and Spectral Tigers.

So why am I, an in game gold maker telling you about all this? Well, I've made some good gold from selling a few of the rare mounts - I sold a Spectral Tiger for over 500,000 gold last year & I'm currently selling an Amani Dragonhawk. The loot card pets also sell well but those I tend to buy to use as giveaways here on the blog - I recently gave away Bloat the Bubblefish and have a few more pets stocked up for future giveaways.

With the cessation of the TCG, many of these pets & mounts will probably see price increases, either on ebay, Amazon or in game as supply is highly likely to dry up. With the imminent release of Hearthstone though, there is some speculation as to whether these rare mounts & pets will turn up in that game. We know that Blizzard have other pets & mounts in the shop but there is always the possibility that the TCG ones may turn up there too!

Personally, I'm going to snap up any TCG pets I see on the Auction House that are underpriced - with the reality of Connected Realms looming ever closer after patch 5.4, I think my Auction House will likely explode into activity & I want to be ready to sell to my new customers! It really helps that all these pets are classed as rare in game & most have really good pet battle abilities - I know Rez of Eviscerated Gaming Podcast loves his Vicious Grell for example!

These are the pets I'm going to be looking for!


I'm also considering buying one of the Timewalkers - Reign of Fire boxes - it is a bit of a gamble to be sure but with demand so high right now, I just need to get one decent pet or mount card out of the box & I'll have made my money back. When I look at the price of the mounts in particular, it's really hard not to take the gamble - I just have to decide if I can afford to take the chance. If I don't get a good one then at least I'll have a nice addition to my in-game collection of pets or mounts!