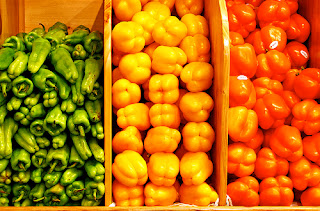 It's been an okay week in sales for me this week. I've been kind of busy on a new project so I've not really spent much time crafting new stuff to sell. This impacts my sales figures as I'm now selling the leftovers from last week effectively! But having said that, I am still selling stuff and as you can see from the screenshot of My Sales, the new crafted PvP gear is starting to sell at last!

Some of the prices are really rather nice too! I've been listing most at 1500 gold but as the market starts to get competition, I've had to drop prices on some items. I made a booboo somewhere too - listing those Greaves of Alacrity at 300 gold? Bah!

I've not been prospecting or milling herbs either so my gem sales are down as are my Shoulder Inscription sales. As I've avoiding the glyph market, milling to get Starlight Ink is a pain! I'm drowning in Ink of Dreams so I decided to try selling some - that worked quite nicely and at a profit too so I've listed some more tonight - in 5's though. Anyone who needs 3 inks to get a glyph made has to buy the 2 extras - sneaky huh? 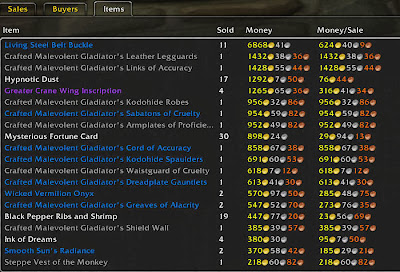 As expected, the Living Steel Belt Buckles have held their price nicely - I'm hanging onto some of my Living Steel though - the price of that has shot up as has the price of Ghost Iron Ore so before I sell it all via Belt Buckles, I want to double check my stock & make sure I have enough for my Sky Golem mount!

Mysterious Fortune Cards are still selling too although they've slowed down a bit too - competitor is coming and going so I have to time my listing right! Just as I logged off this evening though, he was barking his MFC's and mine were selling! When I checked, he's listed all his in stacks of 10 so I just listed 50 singles to bury his stacks. Obviously that only works for me when people without addons go shopping but you'd be surprised how often that does work!

Gifts for Gamers and Geeks

I mentioned my new project earlier so I guess I'd better tell you about it huh? I've started yet another blog but this time, it's a more commercial one. I've partnered up with Cold of Cold's Gold Factory to produce a Gifts for Gamers and Geeks blog, based on his weekly Gifts for Gamers posts. We're just getting started but his experience with Amazon & the gifts posts is really useful and I make it look pretty and do all the chatty stuff on Facebook.

I've always resisted putting too much sales stuff here on AH Addict but I do need to make a few extra pennies here & there if I can so fingers crossed, this is one way to do it! If you want to follow us on Twitter you can @GeekyGiftIdeas or even better, follow our Facebook page at Gifts For Gamers And Geeks and let us know what you'd like to see in future posts. With Halloween & Christmas coming up, let us do all the hard work digging out the cool stuff for you :)

Image © Muffet under Creative Commons licence
Posted by Unknown at 20:12