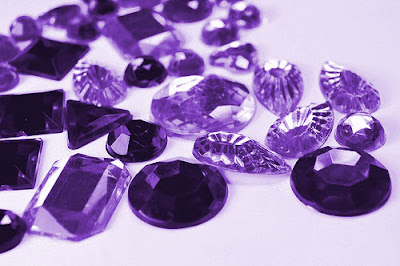 As promised - my first proper weekly sales report since Patch 5.4 arrived and I have to admit, I'm a little disappointed! I've heard/read so many stories & tweets about large amounts of gold rolling in on these big patches that this report seems just a little lacklustre in comparison. Having said that, my server is definitely low population on the Alliance side so I guess it's not so bad really!

I've learned a few lessons too - I wrote about the new Noodle Carts & Cooking Recipes but in my rush to get my Leatherworker & Engineer maxed, I completely forgot to stock up on food stuffs! I also didn't dive as deeply into Glyphs or Starlight Ink as I should have so I'm playing catch up on those too. The good news is though, herb prices seem to be falling a bit so although I'm doing a lot of milling again, at least I'm getting my inks cheaper than I would have previously!

I did however, stockpile a fair bit of Living Steel and as you can see, the Living Steel Belt Buckles are flying off the shelf as expected - as are the various Shoulder Inscriptions. Gems are doing ok too although the prices are swinging high & low on many cuts. It's as if people are still listing them at pre-patch prices instead of making a killing on all these new armor items that need gemming! This was another market I underestimated material quantities for - I think I got complacent with the amount of Ghost Iron Ore I had but forgot to prospect much of it! 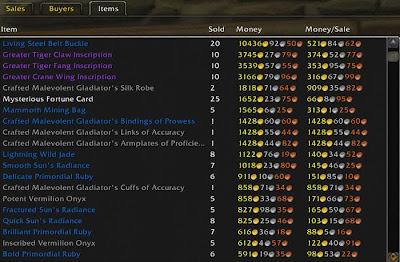 The Crafted Malevolent PvP items are moving too - albeit much slower than the older Crafted Dreadful gear but I'd take a guess that most buyers are over on the Timeless Isle picking up the free loot there. Once the shine wears off that, I'm hoping people will turn to PvP & buy some of this gear. I'm still doing the daily cooldown on my Leatherworkers, Tailor & Blacksmith - I'll keep the AH stocked with at least one piece of each pattern I learn if I have enough materials.

One thing I just noticed I have't done is to make any leg armors! I'll have to fix that tonight. The Tailoring Spellthreads is a market I haven't touched - my Tailor is still level 85 and apparently I need Honoured with the Golden Lotus to get the Epic patterns - I guess I'll have to add that to my growing to-do list!

And I couldn't finish a weekly summary without my two old reliable markets! Yup, Mysterious Fortune Cards & Mammoth Mining Bags are still selling well enough to stay in my top sellers list, even with a little competition on both!

So for this coming week, I'll be prospecting & milling what I should have done before the patch hit & hopefully as people continue to gear up alts, I won't have missed those markets too much! I'm running around the isle on my Paladin & my DK but I think I'm missing something. It's Monk Week over on Laeleiweyn's Alt Appreciation Week so I'll be leveling my first Monk a bit too this week. You can read more Alt Appreciation posts from me over on my other, more general WoW blog if you'd like - She Rides Dragons.