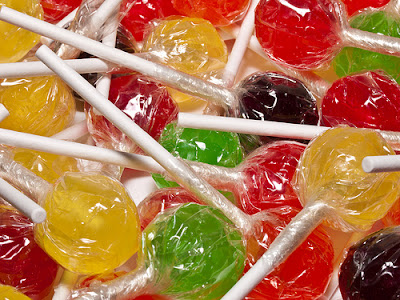 Here we go again - another week's worth of sales and a few changes to my usual top sellers too. My server has been marked as 'New Players' for a few weeks now & I'm definitely seeing more people in Stormwind & Ironforge although whether that is the new players or returning players in time for patch 5.4, I don't know!

My sales have doubled over the last 2 weeks which is nice especially as I haven't been crafting or selling the Leather or Mail PvP gear. I did break down & make a few of the Cloth PvP items though - I have so much cheap Windwool Cloth that it doesn't matter if they don't sell before the patch as the Ethereal Shards they disenchant into will be almost as valuable after the patch!

The Hypnotic Dust was a lovely bonus - I found a few hundred Cataclysm uncommon gems in my Alchemists bank when I was clearing out so I made jewelry & disenchanted it all! The Misthide & Stormscale gear is what I made from leveling my Leatherworker last week so I'm already in profit there now over the leveling cost and she hasn't even started on the main reason I created her! I can't wait for the patch to arrive - I'm really looking forward to reaping the rewards from the Leather & Mail PvP markets!

I mentioned in last weeks report that I had bought a shedload of Mysterious Fortune Cards and many sold as you can see in the screenshot but I've been fighting off low priced competition again. The guy I bought the shedload from said he was quitting but less than 10 days later & he has 40 stacks back on the AH at 8g a piece. I refuse to buy him out again of course but it is slowing down my own higher price sales. I'm undercutting him by 1 copper & burying his auctions under 100 singles at a time! Every time he barks his cheap cards, mine sell! Ok I'm not making the 9g a card profit I would do otherwise but I get the feeling this guy isn't going to let me have my market back so I'll take 3g profit & let him do all the work! 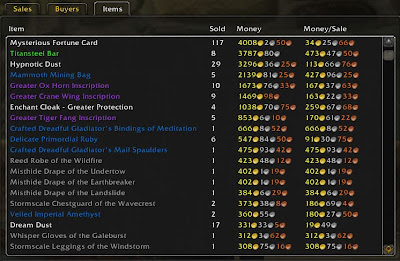 What I did do though was buy up all his Starlight Inks so whilst he's playing in the Card market, I've been selling the Shoulder inscriptions. With a basic cost of about 60g, I'm making between 100 & 200 gold per piece so that almost makes up for the loss of Mysterious Fortune Card sales! I may seem nice but this guy is going to learn not to piss off Nev! lol

Gems have been dribbling out the door - someone crashed the market on Friday so I didn't bother listing over most of the weekend. The price had recovered last night though so hopefully when I log in shortly, I'll have a nice little pile of gold to collect!

Mammoth Mining Bags are still selling regularly and the Titansteel is too - it is a slow mover though & now I have my own Engineer, I'm going to keep the bit I've got left. I've been buying up any & all the cheap Exotic Leather & Magnificent Hides I can get my sticky little paws on - I still don't think I have enough but I'm drowning in Ghost Iron Ore & Windwool Cloth so I really hope those markets pan out as expected in patch 5.4!

Image © wwarby under Creative Commons licence
Posted by Unknown at 19:56