It's been another steady week, only 42k up overall but I did blow 8k on the woundsplicer handwraps for my Priest as the guild really needs another healer. My usual bit of maths tells me I spent 18.5k to make that profit but I have about 5k of cheap ore & herbs in my mailbox waiting for processing so that should make a nice dent in next weeks' spending! Just after I bought the epic, I was finishing off Twilight Highlands on my Pally & they dropped off a random mob so I also have them on the AH at 12k (only ones listed & that's the Auctioneer average, so fingers crossed!) so if they sell at that price, I'll be well pleased! 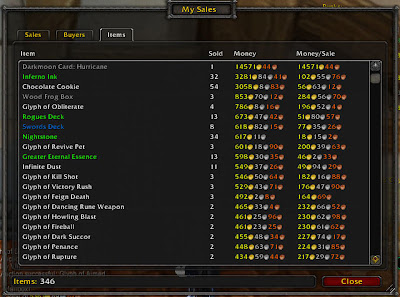 The Darkmoon Faire has left for another month & I have to say, I'm pretty pleased with how this month's Faire went for me. I managed to snag a Hurricane Deck for 9k with the intention of equipping my Pally but when I look on the AH & saw the trinkets selling for about 15k, I just had to try my luck. I'm glad I did but my Pally still needs that trinket! Oh Well, maybe next month hey?
As I mentioned in my Spare Inks, Faire Inks post, I was selling the low level decks as well this month - almost 1300g just from the rogues & swords decks. The mage & demon decks sold as well but I only had a few of those so they didn't make the first page of my results. I also managed to snag a few of the Wood Frog pets from Flik & some more of the White Kittens from Lil Timmy (also in a previous post).
I'm also pleased to see the Greater Eternal Essences make it to my 1st page. That average price of 46g is per Essence not per multiples so it's sort of proof that the Enchanted Thorium Blades post works for gold making too :)
And of course, the Chocolate Cookies have been selling like, well, hot cakes! My Cooking post a few days ago mentioned them & was featured on Wow Insider's Daily Quest section just this morning. If you haven't found WoW Insider yet, go have a look. They have regular sections for each class, for RP, for Q&A, for Podcasts etc & multiple posts each day. Huge amounts of good info all in one place.
I've tried very hard to back off on the glyph front but for now, it seems the habit is too ingrained & besides, I haven't yet found another market to dive into with such profits. Consequently, I am overflowing with Inferno Inks & with the current sales prices, it's just so much easier for me to sell them as is. The thing that caught my eye is the number of DK glyphs in that list so you can be sure I'll be keeping an eye on the DK glyph market for a week or two now. 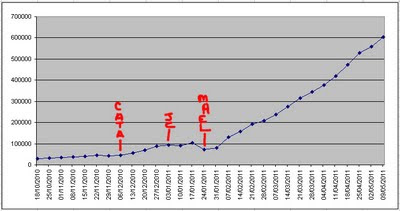 Lastly for this week, I thought I'd show you my latest version of my progress graph. I've marked a few of the major events including Cataclysm launch, the week I powerlevelled my JC & the week they nerfed the Maelstrom Crystal/Alchemy thing. Since then, it's been a pretty steady & surprisingly consistent upward climb. At this rate, I should be able to predict when I'll hit 1 million gold - I'd guess 1st week of July so it will be interesting to see if I can accelerate that date.