﻿
I've been sailing along on a sea of glyphs again but this week, I've added a lot more jewelcrafting/cut rare gems to my routine as well as the Leather Agility PVP sets. Cash received is up slightly and although my usual bit of maths tells me I spent 15000g to make 47000g profit, I happen to know that I've spent at least 6000g on gear upgrades for my Rogue & my Priest as well as a few extra pets to get my 75 pet achievement for my Paladin main.

I revisited the Mysterious Fortune Card market, as I do periodically & found it unattended for an afternoon. Usually I see people barking in trade & when I check prices, they are down around the 8-10g mark but on this particular afternoon, there were only about 20 listed in singles at 18g. I popped 20 singles & a few 3 & 5 stacks up for 17.50g & barked just once as I started my cancel/repost cycle. Normally this would have triggered a wave of other people listing their cards or trying to out-bark me but not on this day for some reason.
So I ramped up production & had the market almost to myself for maybe 2 hours. There were 2 other toons posting but only maybe 5 cards at a time just below mine so they obviously just wanted a little slice of the action :) Eventually the usual card players arrived on the scene & took the market straight back down to the 8g range. I could have toyed with them but I was getting bored anyway so I left them to it! 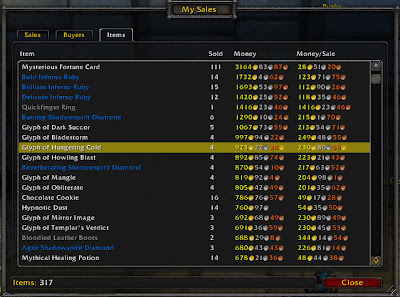 As I mentioned a couple of weeks ago in my Cooking for Gold post, I've been selling the chocolate cookies for the new achievement You'll Feel Right As Rain. They are down to around 50g a stack but the profit margin is huge so I now have maybe 4 or 5 alts doing the Stormwind cooking daily to get the bag of Imported Goods.

I'm still selling various enchanting rods, low-mid level leatherworking items, some enchanting scrolls & the low-ish level engineering pets but they are fairly slow to move & although the profits are fantastic on them, they don't make huge numbers so they don't make it to my top page.

I've had several comments & mails asking which addon I use to show my sales each week so I thought I'd pop it here to answer everyone at the same time :) It's a simple addon called MySales which you can download from curse.com. It's really easy to set up & you can track individual alts, all alts per server/faction, by different time spans or for all time. the two commands I use are /ms config & /ms window & I click on the column header to change the sort order & that's pretty much it.

Hope you find these posts interesting - I often wonder if they make good reading for you guys but as I enjoy them on other blogs, I hope you guys like them too.
Posted by Unknown at 20:15