Last post I gave you an image of a cheeky face, this post, you get the Yuck Face. Yup it's been that sort of week! Regular readers will know that I keep a daily note of my liquid gold totals so I already had an idea that this had not been a good week but until I sit & write this post each week, I don't really take it in. Total sales of 50k is bad enough but with my usual bit of maths, my actual increase in liquid gold was only 23000g. To be fair though, that wasn't all spending on materials, I did splash out & buy the Dragonwreck Throwing Axe for my newly subtlety specced pvp rogue which cost me 10000g - a good deal on my server as they are usually 12-15k!

Another contributing factor was lag/latency issues. It seems my ISP or Blizzard have changed something somewhere in the system so my latency was registering at 7-10k ms, making the game totally unplayable from Thursday afternoon through to Saturday morning. So I lost 2 evenings & a whole day of auction house activity & sales which I think would have been income of around 10-15k. 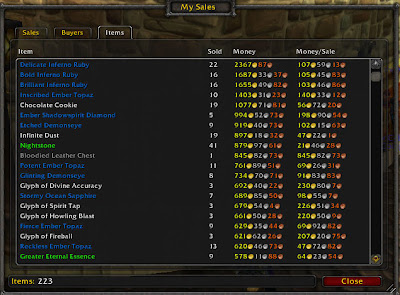 Anyway, enough moaning from me, what did I manage to sell this week? Well, cut rare gems continue to rush out of the Auction House & to help a guildie or two out, I also invested a few JC Tokens to buy some new gem cuts which are selling fairly well too.

Glyphs seem to be slowing down a little but it could be that the glyph sales are just being buried in the gems sales. I'll have to have a closer look to confirm that but to be honest, I'm kinda glad. My husband & at least 2 guildies have taken up inscription recently & are starting to make their way to the Ink of the Sea & Ethereal Ink glyphs, so it's only a matter of time before I end up competing with them. I already have so much more gold than I could possibly use so I hope I can hand over my bit of the glyph market to them & not cause any problems in guild chat.

Chocolate cookies are still selling! As long as I do my cooking daily on a few alts, the supply of Cocoa Beans is good & they don't take long to make either. I have slowed down on the other cataclysm cooked foods - there is a fair bit of competition & some really weird pricing going on. Some days the cooked food is really high priced, the next it's low but the raw mats are high - I just can't be bothered to fight market surges like that.

Infinite dust is also selling well & at prices that would have scared me 6 months ago! I'm still using cheap Wrath gems as I explained in my Old School Jewels post a week or two ago but it's one of those 'when I think about it' things rather than a regular activity. I already prospect/craft & disenchant enough Cataclysm items to make disenchanting Wrath ones just a bit tedious!

Having said that, disenchanting Enchanted Thorium Blades for Greater Eternal Essences is even more profitable now than when I wrote about them a while ago. Current prices are currently in the 55g-70g range so even though it's still a bit tedious, this one gets done more often than the Infinite Dust one :)

I keep saying I must get my Enchanter moving on making scrolls but I get distracted easily - this week I've managed to grind Honor Hold reputation on my Paladin main & respecced my much loved but abandoned Rogue. One thing I will be doing this week is converting my Spare Inks to cards for the Darkmoon Faire next weekend. I've managed to pick up some more cheap Primal Life so at last, I can use up some more of my Darkflame Ink.

Have a good week & happy goldmaking everyone :-D
Posted by Unknown at 10:52