﻿﻿
I've been making some new friends over the last week or two via Twitter and various blogs. It always amazes me how quickly I can feel comfortable with someone once that initial skype call happens but that's what happened when I first spoke to Flux & Jokinee from the Power Word:Gold podcast. After I stopped being starstruck (hey, I've been listening to Flux for weeks, it was like meeting my favourite radio DJ, ok? lol) we sorted out the stuff that had got us talking in the first place & 2 hours later, we were still talking!
Roll forward a couple of weeks (& several more long skype calls) & the guys decided I was to be their next podcast guest so if you haven't listened to their excellent podcast before or if you're curious as to what a British AH Addict sounds like, click the link to Episode 9 NOW! lol
As a result of the podcast, I've gained a few new followers on Google friends & on Twitter (so, hello to you guys) & I just hope you like what you're reading. I asked a similar question at the end of the last post & received positive comments so a big thank you to you guys too.


As a bit of a thank you to Flux (come on, give this a go) & because he posted The Treasure Potion Trash Dash challenge (which I can't resist!) I spent an hour yesterday, stealthing round mobs in Deepholm on my rogue with a potion of treasure finding active & empty bags to start. I headed to the well-known rogue pickpocketing area of Stonehearth (or The Fractured Front, adjoining it) and after picking every pocket in a bunch, I then killed them to get the loot! 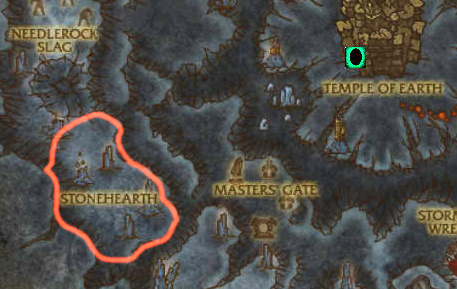 The basic idea is to keep a note of all the vendor values of everything you loot in that hour. It's a nonsense figure because let's face it, we're here to make money but it is a great way to take the server differences out of the equation.
I have to say, I thought picking pockets would be more lucrative although I always hope for the Krol Decapitator or Spinerender to drop from the Flame Scarred Junkboxes. I popped my initial results into an excel spreadsheet which you can see below. 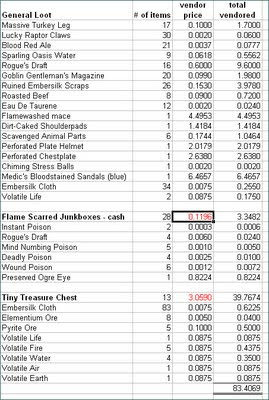 I think what struck me most about this little experiment/challenge is just how low the vendor prices are on items that we, as AH peeps, sell for such high values. Almost 40g & a shedload of Embersilk Cloth was a nice find from the Tiny Treasure Chests so that more than covered the initial cost of the potion but overall, I was a little disappointed with my haul. Having said that, my rogue is not my strongest girlie & I probably spent way too long picking pockets so I'm planning on doing another couple of runs in the next day or two - I'm thinking a skinner Paladin & a non-gathering DK. Just gotta work out where to send my girls on their missions.
Posted by Unknown at 17:04