﻿﻿﻿It's been a pretty good week for me, this week. I've dipped a bit further into the cut rare gems market & it's showing up nicely in my weekly sales list. Even better from a liquid gold point of view, comparing the sales income with my increase in liquid gold figure & I've only spent 2580g this week! That gives me a beautiful profit figure of 66800g-ish so I'm flying high & on a roll!

So you may be wondering how come I've spent so little this week? Well, I was doing a lot of shuffling for enchanting materials at the start of the year but the prices for rares, either cut or uncut were so low, I decided to hang on to them. Now the prices have risen, almost all those cut gems have come from my various banks! 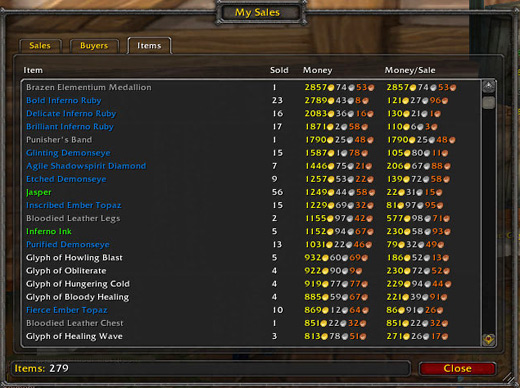 Also this week, I was asked to join some guildies in 5v5 arena for a laugh. They want me to bring my rogue who has been sitting around since she hit 85. Off I went to various gear optimiser websites to see what I needed & then came back & made her the Brazen Elementium Medallion. Unfortunately I forgot to check what she was already wearing! It seems she hadn't been sitting around the whole time since 85, she must have sneaked out & done a dungeon or two somewhere along the line because the neck piece she had was better.

Glyphs have continued to be a strong seller even if the gem sales are pushing them off the first page of my sales figures. I've also sold a few more pieces of the Bloodied Leather pvp set although competition has set in so I may leave them to fight it out for a while now.

Some of the lower level leatherworking items have been selling too - 3 sets of Barbaric Bracers, 2 Gem-Studded Leather Belts & a Black Dragonscale Breastplate have all sold as has the masses of Chocolate Cookies I baked up earlier in the week.

Going forward, I'm almost out of Inferno Rubies & Carnelians so I guess it's time to start prospecting again. Luckily I picked up 200 stacks of Elementium Ore at 25g a stack yesterday (muhahahaha!). I'll carry on glyphing too especially as I have Jewelcrafting & Inscription on the same character.

I'm not sure I could face cancel/reposting gems & glyphs if they weren't on the same character so if you haven't got your professions set yet, that might be something to think about although it isn't the optimal combination, to be fair.

Most bloggers suggest jewelcrafting & enchanting on the same character so you can disenchant the jewellery you make without using the mailbox. The only reason I didn't do that is timing & space - I already had inscription on this alt & enchanting maxed on another. When I needed to add jewelcrafting to my profession list, the only spot was on my scribe so that's where it went! I like happy accidents :-D
Posted by Unknown at 10:29