Well, all I can say this week is 'wow! what a week!' Doing my usual bit of maths, I find that I've only spent about 13.5k on stuff leaving me with a healthy liquid gold increase of 48.5k. I didn't conciously reign in my spending, I've had a few 10k plus income days & I've pretty much been doing my usual routine but looking at my list of items, I can't even see that I've been using up stock items so I'm not really sure what's been happening!

Following on from last weeks' update, where I mentioned the glyph market has gone crazy, I thought I'd post the top 3 pages of my sold items. I finally got rid of the Earthquake Deck that I picked up a couple of weeks ago. That was probably a mistake as I just about got my gold back on that investment! Prices for the Darkmoon cards & trinkets have really dropped with even Tsunami & Hurricane decks selling around the 8-10k mark during the Faire last week.
I did do a bulk deal to get rid of my low level Darkmoon decks - 36 decks of the Rogues, Swords & Mages for around 1000g. I possibly could have made more during the week, selling them via the AH but I wanted the bank space & I wanted to take the deal now rather than waiting. I also used up some of the other uncommon inks to make the Demons Deck but that went to the AH, along with spare cards of all decks. Cash is still trickling in from those but I now have an extra 20 spaces in my bags :) 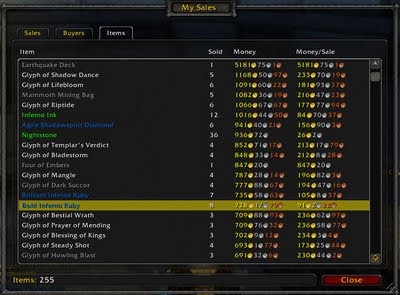 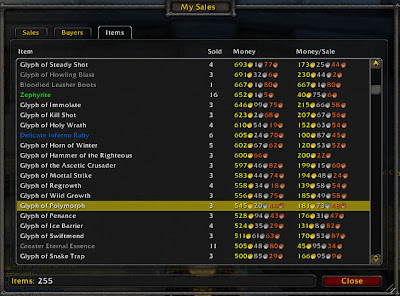 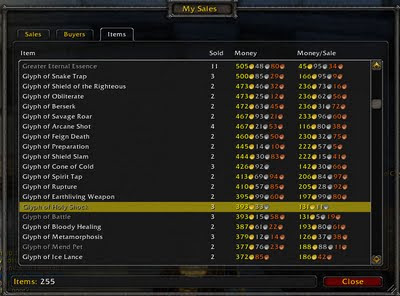 So, apart from the usual, most popular gems & cuts, the only items making the top 3 pages other than glyphs is my mammoth mining bags & a single solitary set of Bloodied Leather Boots. You can easily see the prices I've been getting for my glyphs - I don't set the markets - I use TSM to post which pretty much means I undercut glyphs already there.

I have changed my glyph process slightly but I thought I was just making my life a little easier, I didn't think it would prove so effective in increasing my sales! I used to have a weekly glyph crafting session, where I would spend maybe an hour or two, checking, milling herbs, ink making & glyph crafting then I would top up my stock midweek. Now I'm spending maybe 15 minutes extra per day, topping up only where the gaps are & only the top profit ones (per TSM scans).

Other proffs have kind of fallen by the wayside - I've been making some of the low-mid level LW items & they have been selling & at a profit but I'm not sure the time spent is the most efficient use of my time. I'm going to keep making them to see if I can raise the prices a bit more & also for future posts info. My Blacksmith has just hit Northrend so she will be mining cobalt this week - time to see if there's any life in the BS markets at this level!

I really need to get my enchanter working - I batch make scrolls periodically but she gets little love in between times. I find the scrolls market so confusing, I tend to put it off. I guess TSM has made glyphs so simple for me, I just wish there were an easier way for enchants too!
Posted by Unknown at 16:31