I should have posted this a couple of days ago but RL has a way of interrupting even the best laids WoW plans so here it is now! At first glance, it looks a lot like last week but doing my bit of maths tells me I spent 30k to make that 55.5k sales, leaving me a liquid gold increase of 25.5k but I spent 8k on a weapon for my pally just the night before I take my screen shots so actually, I only spent 22k on materials & stuff.

I don't know about you guys but I don't watch every penny that I spend on mats - I just know that if I spend 1k on herbs I can make good money on glyphs (maybe 5-7k return) & I'm happy with that. Same with the old Obsidium/Elementium shuffle - I don't watch every penny or where every gems goes - I cut & list the rares but only 2 per cut & I don't have a huge number of cuts, I list the jasper/nightstone/zephyrite on JC daily days & I often craft & D/E the alicite/hessonite for dusts for my enchanter. If I increase my stock one week, it will sell the following week. 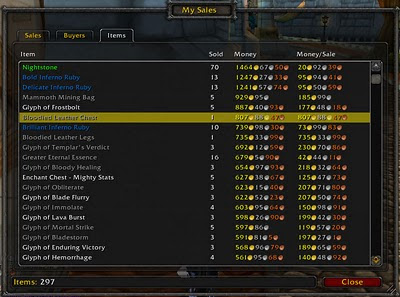 You can see from my list of top sellers that I've slowed down on listing the Inferno Ruby cuts - I just can't keep up with demand to be honest - I've transmuted a load of carnelians & I've prospected a ton of ore but the RNG doesn't like me much - I get a lot of Ocean Sapphires & Demonseyes but not that many Inferno Rubies.
Having said that, the glyph market has gone crazy this week. Having posted just over a week ago about 2 guys tanking our glyph market, it seems that once again, the WoW gods have decided to call bullshit on one of my posts! After waiting a day or so from that post to get some comments & follow their advice, I logged in, all ready for a fight to find that neither of the two guys I mentioned were anywhere to be found! I don't know yet if one of my competitors took them out or I was just late posting about it but they haven't been back in the days since! As you can see from my list, prices have shot back up - I can live with this, That's for sure!
I also picked up some lower level LW mats & have been exploring the lower level patterns - some make nice profits, some cover costs but they are all a pain to pick up mats for! I've put things like the various dragonscales & rare leathers in my TSM dealfinder list so I'll just craft those as & when I get enough mats. I covered a few in my post on mid-level LW'ing last weekend.
The only new venture on my horizon was to try the Leather Agility PVP gear - I made a full set of the Bloodied Leather Armour - they pretty much all sold within the first day or 2 - the chest & legs for a very nice price so I guess I'll be making more of those! I suppose I should pick up the rest of the pvp patterns but I've been lazy & not done my Tol Barad dailies this week so I'm short on leather. *slaps wrist*
I'm slowly levelling my Blacksmith & my Engineer - I managed to get a boost through Gnomeregan & picked up the Pet Bombling schematic so now she can make 2 pets! I always try to keep a couple listed & they sell but not in enough quantities to make it to the top of the list!
So that was my week, last week - this week so far, has been a frenzy of glyphing & boosting guildies. I'm hoping the extra effort  will show up but we'll have to wait until the weekend for results!
Posted by Unknown at 09:20