I think I've mentioned before that I'm working on my Loremaster achievement but I'm also working on various reputations for The Exalted achievement & I'm doing the rep grinds that give mounts or pets for those achieves too! When I say I'm working on my Loremaster, what that really means is that I pick a zone based on what rep, mount or pet I can get or what materials I'm having problems with at the AH. Last week I went to Winterspring and as I've never quested there on my pally, I decided to keep a good list of what I picked up through the zone. 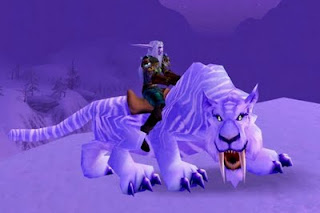 I was at about 0/3000 Neutral rep with the Wintersaber Trainers but I really want the Frostsaber mount so I decided to combine the rep grind with the questing. My pally is also my skinner/LW'er & I'm constantly struggling to find affordable Thick Leather & Rugged Leather at the AH so I emptied my bags & off I went.
2-3hrs of questing & a bit of rep grinding later & this is what I'd picked up, with their current AH values on my server:-
74 Thick Leather (222g)
94 Rugged Leather (376g)
4 Thick Hides (28g)
7 Rugged Hides (35g)
38 Runecloth (27g - 40g)
25 Bear Flank (30g)
18 Giant Egg (36g)
Recipe: Elixir of Giants (48g)
1 Elemental Water (7g)
1 Core of Earth (2g)
1 Globe of Water (5g)
1 Ironweb Spidersilk (4g)
5 BoE Green items
So that's a total of 820g and 130g from loot, vendor trash & quest rewards makes a grand total of 950g - woop woop! lol
I didn't get very far with my rep grind though - only about 1200 into Friendly because I googled for a guide & found out that the method for getting the Frostsaber mount is changing in patch 4.1. Instead of killing chimaera, bears & furbolgs, Blizzard are introducing a 20 day quest chain to feed, train & generally care for your cub. I didn't think I could grind the rep before the patch hit (there was a possibility of it hitting today) but now I have another week to do it, I may carry on & stockpile the leathers at the same time.
If you're a miner, Winterspring is still good for Thorium, particularly the old favourite Yeti Cave as well as Owlwing Thicket & Frostwhisper Gorge.


For herbalists, Winterspring is the only place to find Icecap as far as I can tell & there's a fair bit of Mountain Silversage here too.
For those of you who sell limited supply vendor items/recipes/patterns, look for Xizzer Fizzbolt in Everlook - he usually has 5 engineering schematics - including Fused Wiring which I wrote about last week!
If you haven't got your Timbermaw Rep up, I'd recommend Alto's post but do Winterspring first - you get Winterfall Spirit Beads when you kill the Ursa's & Shamans for the rep quest which are useless if you already have Timbermaw rep as they are soulbound & can't be passed to an alt or sold.
So, where do I go next on my Loremaster/Exalted/mount chase? Any suggestions welcome or if you'd just like me to cover a particular zone in a similar vein to this post, let me know in comments or you can contact me via my new gmail address at the top left of the page :) I look forward to hearing from you *she says, hopefully* lol
Posted by Unknown at 10:39