I thought I'd join the ranks of bloggers showing what's been selling for them - it gives a nice comparison of prices across various servers & perhaps, gives newer goldmakers some hints of where to look for new markets themselves. 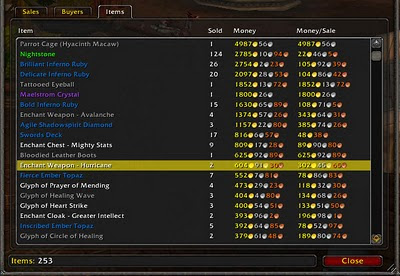 So what's there to talk about that those numbers don't show? Well, on my So Close Now post, Vince from Bank of Wukam suggested I expand my use of TSM (Trade Skill Master addon) to my JC cut gems market so I did! I'd not been making much use of the cut gem market because everytime I looked, prices were pretty low & the deposit costs were huge. But having TSM list at 12hrs & just doing a few cancel/reposts per day, I have to say the Red cuts have been flying off the shelf. The Fierce & Inscribed Ember Topaz's aren't doing too badly either.
I've picked up the new Burning & Reverberating meta cuts over the weekend so I now have all 3 of the new ones. Next weeks summary will show how they are doing as well as the 3 other new cuts I now have tokens for.
I picked up a Hyacinth Macaw whilst levelling through Stranglethorn - nice little bonus although it took 2 weeks to sell and nowhere near the price I had hoped for. I think the drop rate has been increased so the price is dropping. I've got another alt ready to go thru there so I may just keep the next one (if I get lucky again!).
The biggest surprise for me this week has been the sale of the Swords & Rogues Decks - I only made them to get rid of the hunter's ink & dawnstar ink that just wasn't selling but was filling up bank space. The Rogues deck hasn't made it to the top half of my sales figures but only because they are selling slightly slower & for a bit less.
So on to the updates - my Masterchef Goblin Edition post has been under test for the last week or so & I have to say, I'm a bit disappointed! Since I picked up my figues & started working that market more seriously, several new names have appeared & seem to have an unlimited supply of mats or just don't care - the only one selling at a profit for now is the Basilisk Liverdog (haste buff) although some bright spark has posted the Basilisk Livers for 15g each all weekend! I'm not in the mood to try & dominate the market so I'll just be keeping an eye on it & pop in & out as necessary!
In a comment, Alto from Alto's Goldish Advice, asked me to do a 'how-to' use TSM for my glyphs - I've never written an add-on guide thingy before so it's in the works, I just keep thinking of bits to add everytime I think it's just about finished - I hope to get it posted later this week Alto :)
A little while ago, I promised Xylaria that I would play with Blacksmithing on my little AH Alt - I haven't actually got around to it so I apologise now & hope to tackle that as well this week.
Posted by Unknown at 09:40