So Close Now & A Nice Graph

I was hoping to report this last week but the AH has filled up with cheap Obsidium & Elementium ores so I just had to have them, setting this report back by a few days! But, as you can see, I finally made it to a nice round 200,000g. I've also got my DK to lvl 80 so she can do all the JC dailies now. 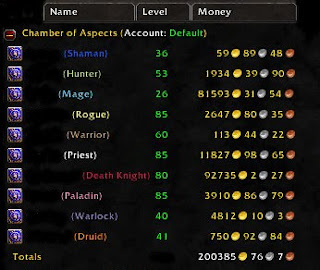 One of the few routines that I do stick to, is noting my daily gold balance on a spreadsheet & I thought you guys might find it interesting to see my progression over time. I've marked a few important dates - obviously the release of Cataclysm brought huge changes & increased prices but I think for me, the addition of Jewelcrafting to my repertoire has made a significant difference. You can see my DK's gold balance of 92k - that is all my JC & Inscription profits - I zero'd her balance to 5k when she levelled JC'ing then sent that 5k to my banker once my DK was self sufficient. I'm quite pleased with 92k over 2 months, I have to admit!

The other huge difference has been installing & using TSM for my glyph market. I've always dabbled in glyphs but TSM makes it so much quicker to cancel/repost & it highlights which glyphs to make. I've recently expanded my use of TSM to my Enchanter but only for the cata enchants for the time being. I levelled enchanting late in Wrath so I don't have many of the non-trained ones & I also haven't really built up knowledge on the twink enchants. 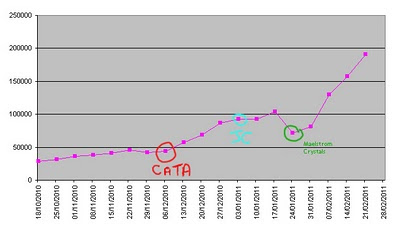 ﻿The one thing I didn't mark on the graph was my purchase of the new Agile Shadowspirit Diamond recipe around the 14th February - I thought originally that it would dent my figures but obviously it didn't - the sudden sharp incline at the end there, is a combination of meta gem sales & adding enchanting to my TSM set-up.

So where next? Well, my plan for today is to level tailoring on my Priest asap - I have most of the mats to well into the Wrath levels but Frostweave Cloth is so scarce, I may have to go farming. I hope I can make a bit of gold from the crafted items & I shall definitely be making netherweave & frostweave bags for all the points they can give! It may not be the 'most efficient use of cloth' way to level but it will certainly off-set some of the costs.

After that, well, it's just Mining/Blacksmithing on my lvl 60 warrior but that's going to take a bit longer.
Posted by Unknown at 11:00