So, back to the routine - opened mailbox to find most of the recipes & herbs had sold giving a total pot of 99g 57s 17c to play with today. I'm quite pleased with this so I treated myself to a traditional white hanbok - just to make my banker a little more presentable :) 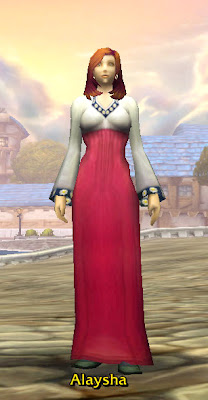 Bit short of time so I just ran to cooking recipe vendor in Old Town, bought 1 of each & listed them. I use the Dwarven District AH because it's quieter there & less laggy but also because the engineering supplies vendor is right outside. I check the prices of the bronze tube & other bits he sells then pop back out & buy them from him if there are none on the AH. Today, no bronze tubes on AH so bought 2 & listed them as well.
Did my usual vendor search - only 1 deal worth worrying about today - 11 frozen orbs for 16g bid - it's a 48hr auction but with a guaranteed vendor sale price of 55g that's 38g profit so it's worth laying out 16g now. I'm not likely to get them so my gold will most likely be returned much sooner!
At this stage, I'm concentrating on small stuff - low bids & short auction times - until I can build enough capital to feel more comfortable with risking larger amounts. I'm also building my scan data & getting a feel for the market on this server. It's very different here than on my main server - glyphs for less than 1g, stacks of ores (iron, gold, silver) for less than 1g and herbs at about 1silver each!

Most of my bids are under 1g but there are quite a few of them - today it seems the glyph market is dumping stuff so about 10 glyphs bid for as well as a few bits of cloth & herbs.

Midafternoon, I popped back to see if anything had been happening - I'd won the glyphs but not the frozen orbs (as expected) & some of the cooking recipes had already sold. Placed a few more bids, listed what I had won & left it there for now.