What's Been Selling This Week? (Or Not!)

So what's been selling this last week - not much at all, if I'm honest! I feel I should be ashamed to show you my screenshot this week but hey, it is just a game after all! With the wipe on the Hearthstone Beta last week, I've found myself sucked into that big time - re-leveling all my decks to 10 and using some of the gold to actually try my hand at arena for new packs. I think I've managed to win 3 games in all my arena attemps so I have a lot to learn about deck building, that's for sure!

I haven't really been paying attention in WoW - just relisting what I have in my bags & slowly emptying the junk out of my overflowing Guild Bank.I have kept up with some of my profession cooldowns but not all of them - mainly the Engineering one because I really want the Sky Golem - I'm still days behind the curve though - the Sky Golems should be hitting the EU Auction Houses tomorrow I think & I have only 15 or so Jard's Peculiar Energy Sources so I still have 15 more to make :( 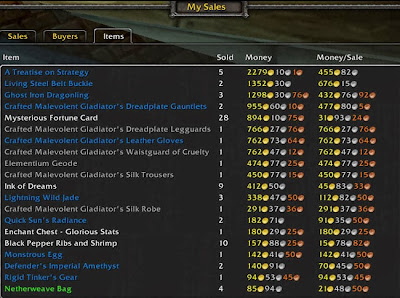 As you can see from my screenshot, the Darkmoon Faire is in town & the Treatise on Strategy was a random find in my guild bank - just as well really, given how bad the rest of my sales have been! I promised myself I'd do better this week too but it's now Wednesday & I'm only just doing a post I normally do on Mondays - can you guess what next weeks screen shot will look like? lol

I am going to try & do some crafting tonight though which should help a bit. I haven't been buying materials either but as I did stockpile a fair bit before patch 5.4, that shouldn't be too much of a problem. The Timeless Isle quickly lost it's appeal for me - I only go there to skin now but Exotic Leather is so cheap on the Auction House, it's almost easier to just buy what I need!

Having said all that & having seemingly lost the will to play much right now, I did have an idea for a mini project that might help. I'm going to start it & see if I can drum up some enthusiasm in myself before I publicize it though - I really don't want to get 3 or 4 days in & decide it was a terrible idea!

I guess it's time to dig the alts out and have a look at all the stuff I missed whilst rushing to level 90 on my Main. There's bound to be some gold making along the way too though, isn't there?