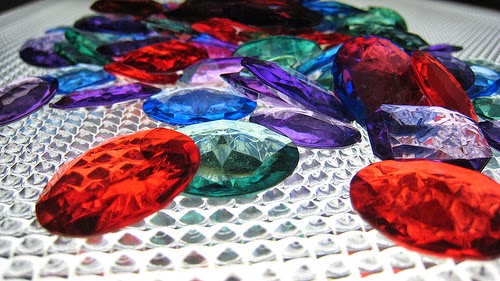 After the disgraceful showing in my last weekly report, I knuckled down & got my crafters working again and as expected, my sales this week reflect exactly that! It just shows though that you can make some gold every week just by logging in and listing stuff. The point is to craft a bunch of stuff at one time so you don't have to craft every day. That's only if you want to tone down your goldmaking time of course! Otherwise the opposite is true - the more regularly you craft & list, it seems the more gold you make - I'm not saying bulk craft every day - that just isn't efficient but certainly restock on the fastest selling items. That's just common sense!

So as you can see from the first screenshot - I found myself a great deal on Borean Leather & got to work making Mammoth Mining Bags - I have about 30 in the Guild Bank now so I won't have to craft those for a while. 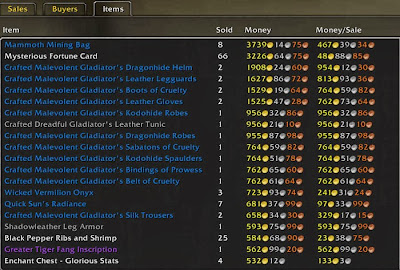 Mysterious Fortune Cards - yup - they are still selling & I'm still not barking them! I list about 20 singles, 10 x 5stack & 5 x10 stacks and just top up as and when. I list them for between 14 - 16 gold each when I don't have any competition and will go as low as 10 gold each when there is competition. You may remember I bought 1500 or so for 5g each a while back - I'm still selling my way through those but I knew it would take a while to recoup my investment.

It looks like people are getting bored with the Timeless Isle already and PvP crafted armor sales have improved dramatically. It probably helps that I've dropped my prices - not so much profit per item but with Exotic Leather so easily & cheaply available now, the 1000 gold plus prices felt like gouging & judging by the sales, PvP'ers either felt the same or couldn't afford those prices!

The tailored PvP items are also selling but again, prices are nowhere near what I think we'd all been hoping for. Having picked up most of my Windwool Cloth at around 1gold each though, even the 8 bolt PvP items still only have a crafting cost around 40gold so selling at 200gold or more is still a nice profit!

This week, for a change, I've included a screenshot of page 2 of the My Sales summary. Mike wrote in to ask what other stuff was selling at lower prices as he doesn't have a maxed character/profession yet. I'm not sure how much help this is Mike, but you can see that some of the 2nd page items are flips and some are lower level items. The level 83 & 84 Green armor market is still moving - I buy almost anything at around 25-30 gold and sell level 83 pieces for 175g and level 84 items for around 199g. Avoid the crafted items though - they just don't sell or have such good stats on them. 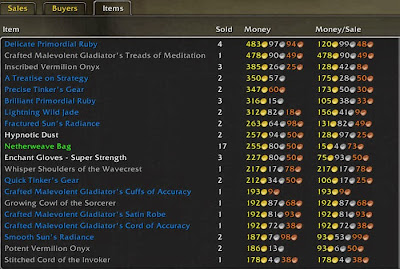 I dived back into the cut gems market this week too but I badly miscalculated my stock pile of gems pre-patch so I'm having to watch the prices like a hawk - I have plenty of Ore to prospect but I really don't want so many Common gems. I'm watching the Golden Lotus prices at the moment & transmuting Commons to Rares if the prices are right. The supply of uncut Rares is pretty low on my server at the moment with the Uncut gems selling for higher prices than many of the Cuts so I made an investment and bought out 90% of the Golden Lotus market so I have plenty to transmute. I'll let you know how that goes!

A few other bits and pieces moved this week too - the Hypnotic Dust seems to sell slowly but almost always for a great price. I've made a note to myself to look deeper at that - maybe buy up cheap greens to disenchant or look for cheap Cataclysm gems to make jewellry to disenchant. I thought I'd seen the last of those days!

Anyway, that's enough waffling from me - I think you get the picture though - a little bit of time & attention has tripled my sales this week from last week (I know, still not that amazing but it's a dying server!) - actually having the right stuff to sell makes all the difference so be casual, be a bit lazy if you want to but don't forget to do some work on your goldmaking!

Image © Meetar under Creative Commons licence
Posted by Unknown at 16:00