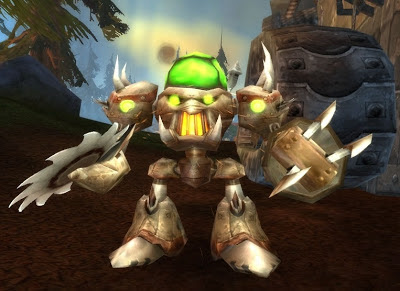 All the Engineers I know were getting excited for patch 5.2 with the datamined Sky Claw mount becoming available - sadly it never made it to the live release & Engineers have been moaning about it ever since! With the release of patch 5.4 on the PTR, a similar mount was datamined called 'Not Sky Claw' which it was assumed was a placeholder name but now at last, Engineers are rejoicing again! Yup there's a new mount called the Sky Golem that apparently replaces the Not Sky Claw!

Sadly, it looks as though this isn't going to be a 2 person mount but one which will let you pick herbs without dismounting. I can live with that disappointment though - this mount looks absolutely amazing & for now, at least, isn't marked as Engineers only so hopefully it will be sellable like the Mechano-hog/Chopper mount from WOTLK days.

It's basically a Shredder suit and from early reports on Wowinsider & MMOchampion, it has 4 different colours. The materials are currently shown as 30 x Jard's Peculiar Energy Source & 30 x Living Steel, with the Jard's being on a daily cooldown, requiring 10 Ghost Iron Bars to make and are bind on pick-up!

This means that it will be at least 30 days after patch day before an Engineer can craft this mount as long as they don't miss a cooldown too! I think the first Engineers to get this crafted will make an absolute killing on the Auction House - I would happily pay 50,000 gold for it and with the crafting cost being less than 20,000 even on an expensive server, that will be a nice chunk of profit for someone!

I don't usually buy Living Steel as I have 2 Alchemists & use their cooldowns most days but I think I will keep an eye on the prices & snatch up a few when the price does drop below 450g. That will allow me to continue making a profit on my Living Steel Belt Buckles whilst keeping some Living Steel in reserve for the mount! The other option for Living Steel is the transmute spell that uses 3 Spirits of Harmony - I don't know about you but I just don't have that many Spirits & I sure as heck don't want to go & farm them!

I think it may be time to get my Engineer leveled at last - that means I have to resurrect my unloved Warlock & get her from 50 something to 85 at least - Yay! yet another project to add to my list!