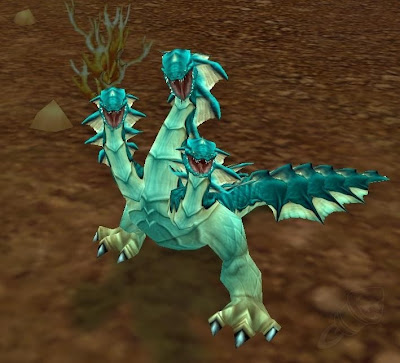 If you've been doing the Battlefield: Barrens & Darkspear Rebellion quests in patch 5.3 then you will probably be familiar with the weekly quest to earn your Radical Mojo and 200 Valor Points. Collecting various supplies also gives you access to Epic armor items with an ilevel of 489 - not the best but certainly very handy for any fresh 90's! You will need a Radical Mojo for each piece of armor though so it's not quite as easy as it might sound!

If you've got the armor you want and have a spare Radical Mojo, you can purchase a Gahz'rooki's Summoning Stone from Ravika, the Darkspear Rebellion Quartermaster located just outside Razor Hill. It's a rare quality battle pet in the form of a Hydra which in itself is great fun as I really like those little critters!

So why am I telling you about a cute battle pet on a gold making blog? Well, when patch 5.4 is released, that will be the end of the Battlefield: Barrens stuff & the Quartermaster will be removed from the game, creating a void in the availability of this pet. It has been confirmed on Twitter that Gahz'rooki will become a rare drop but we don't know yet just how rare he will become.

I've been watching the price on this pet drop recently as more & more players complete their Battlefield: Barrens stuff & just throw this spare pet onto the Auction House. Prices on my 2 main servers are less than 500 gold now and sometimes as low as 250 gold. I think it's definitely worth a small investment to stock up on a few of these now - they aren't one of the best battle pets but for collectors of rare pets, it will always be attractive.

I'm not going to go crazy & fill my bank with them but I am going to snatch up any of the really cheap ones. It's a risk & a long term strategy - it's unlikely they will sell like hotcakes but as a small but steady flow of profit, it will be just another string to my bow.