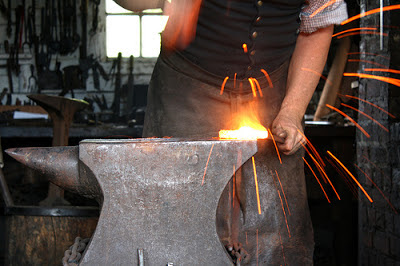 Big news hit the patch 5.2 notes late last week & I thought it might be useful to pop some links here for you to have a look at. Along with the usual class changes, new raid/dungeon info, glyph changes & pet battle changes, there is also a large section for professions, especially Blacksmithing. You can read all of the patch 5.2 build 16503 on MMO-Champion if you wish but some of it is just datamined & a little lacking in explanations. Wowhead has a much better explanation, focusing on the Blacksmithing changes including some analysis and late yesterday, Euripedes on WoW Insider also laid out his thoughts on how this could affect things in game. The comments on both articles make for some interesting reading if you ignore all the panicky 'I hate change' type ones!

Just in case you don't want to wander off to read all that stuff, I will summarise it here though. Basically, a whole bunch of new 'Training Project' recipes will be added to an NPC in your faction Shrine in the Vale of Eternal Blossoms. All of these new recipes take only Ghost Iron Bars in varying quantities and will allow a level 85 character to skill up to 500 using only Ghost Iron Bars. Looking at the list of 'projects' and the huge amount of Ghost Iron they require, my inner goblin is rubbing her hands with glee at the thought. However it does have huge implications for other parts of the Auction House game as well as the game in general.

My thoughts on this

Well, I have to say, I like the general idea of simplifying the earlier stages of all the professions. I'd imagine it would be fairly straightforward to remove some of the harder to gather materials & just make the low level recipes require basic materials - for example, take out the various 'scales' 'hides' etc from the Leatherworking recipes & just require leathers or take out the various elemental bits of engineering/blacksmithing recipes & leave them using only ores/bars. The new training projects way seems a very drastic change that will undoubtedly cause much outcry of dislike & relief too.

Remembering that this is just patch notes for the PTR (Public Test Realms), it could change before it goes live. The amount of Ghost Iron required for the training projects seems pretty damned high to me but then again, that could be Blizzards' way of trying to keep the uptake slow at first. The effect on the economy will be interesting to observe - more bots, more levelers choosing to level with only gathering professions, higher prices in several related markets & of course, all the goblins (like me!) trying to make as much gold as possible as quickly as possible.

My Plan of Action

So I have to say, yes, this time I am going to stockpile. I don't usually stockpile in any great quantities, mainly because I'm a bit slow off the mark & prices have usually risen by the time I wake up to the opportunity! But this time, I got lucky! The morning before this announcement was released, I had already decided to up my gold making activities again & had picked up about 200 stacks of Ghost Iron Ore with the intentions of crafting & shuffling like a crazy fool. Since then, I've picked up another 100 or so stacks, all below 50g per, and my mailboxes are overflowing.

I'm keeping an eye on Trillium Bars & Living Steel too as well as the basic Spirit Dust for my enchanter. My thinking is that the easiest source of Trillium Bars is the Alchemy transmute from Ghost Iron Bar to Trillium & as it has no cooldown, some players will be producing Trillium as a way of increasing their profits from the ores. As it is so easy to produce, it's a good way of making profits whilst waiting for the daily Living Steel cooldown, as long as you can get your Ghost Iron Ore/Bar at reasonable prices.

This new leveling way will be available to level 85 alts and above, making it a great way to switch professions, albeit an expensive way. Prices for Ghost Iron Ore (and related markets) will undoubtedly rise through the roof for a while until some kind of equilibrium is achieved in the market. The bravest, risk-taking goblins will make a killing whilst the rest of us just make some nice profits.

Have you started stockpiling? What do you think of these changes? I'd love to hear your thoughts on this so leave a comment or you can tweet me @nevahaddict if you'd like to.

Image © Derekskey under Creative Commons licence
Posted by Unknown at 17:00