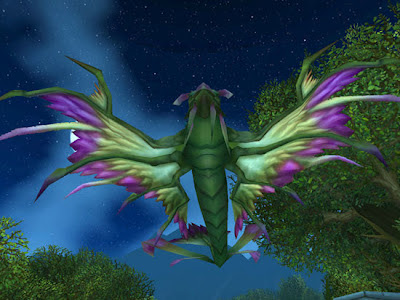 Oops! I dropped the ball a bit this last week, sorry for lack of posts here. I've been kind of focused elsewhere & didn't look up until now! Anyway, today is the penultimate day for my 20 Days of Gold Making and the topic for today is "Have you bought yourself anything really expensive as a reward for earning all that gold? Or do you have a self-present in mind for when you reach your goal?".

Well umm yes, I did buy myself a few presents, just a few mind you, some on this list were for friends and guildies who had put up with my obsessive gold making for the previous 6 or 7 months! I'd already bought myself the Vial of the Sands so that's not in this list.

What I did need was better gear so after I'd spent the summer finally leveling my Hunter, I treated her to a Witch-hunter's Harvester and bought one for a guildie too. Three Mekgineer Choppers (for me & 2 guildies), a Traveler's Tundra Mammoth & the Ring of the Kirin Tor completed my immediate spending spree but over the next month or so, I splashed out on quite a few other expensive goodies too!

As my Hunter love continued, I treated her to a Lava Bolt Crossbow and my Priest got a major boost from the Chelly's Staff of Dark Mending. Next to see a little playtime was my Death Knight - my scribe/jewelcrafter who had barely left the city for the previous 7 months! I can't remember exactly what I bought her but as she was dual-wield, I definitely bought 2 expensive somethings for her!

But it didn't stop there! oh no! I had a warrior on her way up and when she eventually dinged 85, I bought her a Masterwork Elementium Deathblade. All of my max level alts were kitted out with the best weapons I could find even though I rarely played most of them!

So at this point, my girls were all kitted out & I was focusing on getting my Loremaster finished which I did on Xmas Day 2011. A few days later, I just suddenly stopped playing. It was almost 4 months before i returned to game at which point I went on another spending spree!

So where am I now? Still hovering around the 1 million mark, thanks to the Tiger sale. I've been very lax in my goldmaking during Mists of Pandaria but it's creeping up slowly. I'm having fun leveling & dungeoning though and let's face it, no-one really needs all that gold to enjoy the game.