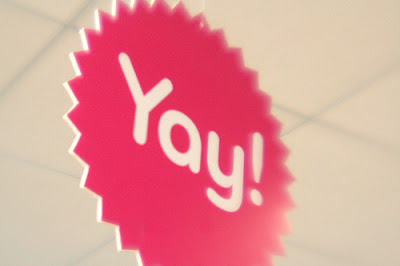 Following on quite logically from Day 12 Biggest Oops, today's topic in my 20 Days of Gold Making is "What was your biggest Yay moment?"

I've been wracking my brain trying to decide which was my biggest 'Yay!' moment but most of them have not been gold related. Hitting 80 on my first ever alt, hitting 80 on my 2nd alt, the by-then hated rogue (I am a totally useless rogue & it took forever to get to 80 & a lot of deaths & bandages & healing potions!), off-tanking ICC for the first time & more recently, finally hitting Exalted with Golden Lotus on my Paladin (that was hard work too!).

Notable 'Yay!' moments include buying the Traveller's Tundra Mammoth & the Mekgineer Chopper - both expensive mounts at the time and in the case of the Mekgineer Chopper, well overdue! I had promised myself to buy it for my cute little pink pigtailed rogue when I hit 50k but when the time came, I was in full gold-making mode & that included not buying myself luxuries. Once my daily income was regularly in the 5-10k profit region though, I persuaded myself than the Chopper was only 2-3days profits & it wouldn't slow me down too much on my road to gold-cap!

I guess you'd expect hitting 1 million to be a big 'Yay!' moment & truthfully it was but it was also a big sigh of relief moment too. I'd been so focused on hitting that gold cap, I'd missed my guild dying around me, I missed most of the Cataclysm dungeons & when I eventually did stop & look around, I was kind of lost. I wrote my regular 'What's Been Selling' post that week & talked a bit about the anti-climax of finally hitting gold cap.

After that, my favorite 'Yay!' moment was when I snagged the Witch-Hunters Harvester polearm for one of my guildies & a Masterwork Elementium Deathblade for another. I tried to buy them both the Traveller's Mammoth (as well as a couple of other close guild friends) but none of them would accept!

My most recent & probably biggest ever sale was finally selling the Spectral Tiger mount I bought last summer & not only selling it but finding out one of my Twitter friends is one of my competitors on my server! It truly is a small world but we had a big chuckle when we revealed out character names to each other!