I finally managed to get my EU account upgraded to the new expansion Mists of Pandaria but have spent the last 2 days just trying to get my head around all the possibilities. Have 6 possible candidates for leveling first and all the professions to level has resulted in 2 days of Auction House chaos & profession confusion for me but I think I'm getting there!

I did manage to level both my Alchemists to 600 very easily (post coming up on that soon) & I took both of them to Halfhill to get their farms started. Whilst travelling there, I bumped into Claretta, an Adventuring Supplies trader sitting at Pang's Stead in the Valley of Four Winds.

Now one of the big markets during Cataclysm has been the level 77-80 green (uncommon) quality armour & weapons markets. If you were asleep or AFK, these were Cataclysm items useable by level 77 characters & up, with the obvious benefit of much, much better stats than the level 77-80 Wrath gear.

There has been some talk on Twitter about whether this 77-80 market will survive & I have to say, judging by my sales over the last week or two, yes - I think this market will survive! As you can see from my screen shot below, I have been buying Cataclysm 77-80 level gear for less than 50 gold each & reselling them quite successfully at 199 gold each. This screenshot is from my US account only but I have had similar success on my EU account although by using the Remote Auction House, none of my sales statistics were recorded - boo! 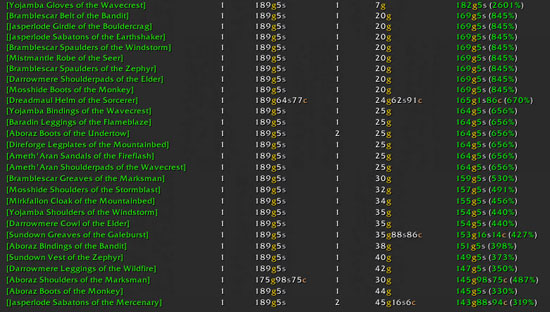 So back to Claretta & her fellow Adventuring Supplies traders - she sells a full set of item level 372 green quality armour for very reasonable prices. My US Hunter only dinged 85 a few days before Mists of Pandaria was released & as I don't usually do many dungeons, my poor hunter was not looking forward to the initial struggle to quest in the new zones, being dressed almost totally in Cataclysm quest rewards green armour!

As you can see from the screenshot below, the stats on these items are really quite good - especially when compared to many of the Cataclysm items my girlie was wearing. I had already picked up 3 or 4 Pandaren quest reward items but I was still struggling a little so I decided it was worth 150 gold or so to replace the worst 3 items. 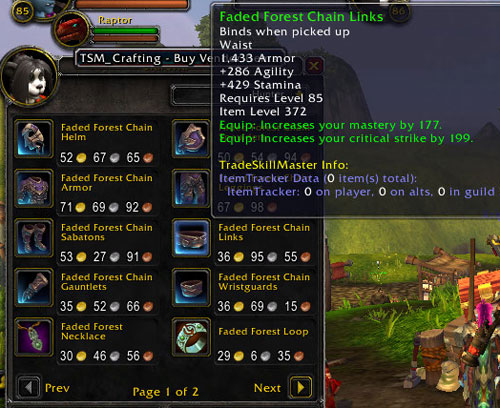 With these wandering traders so easily available & with the Auction House flooded with Mists of Pandaria green quality items for very low prices, I have to wonder if an equivalent to the 77-80 market will be able to thrive during this expansion. I know many Enchanters are currently snapping up many of the lowest priced greens on the Auction House to disenchant but when the leveling buzz dies down a bit & everything starts to even out, these travelling traders will provide an alternative to the Auction House for buyers.

I know I won't be buying gear for my fresh 85 from the auction house unless the prices are really cheap. I would guess that buying cheap Mists gear & relisting them for much higher prices will find a small market - after all, there will always be players unaware of the travelling traders or those who simply want their gear straightaway who will purchase the higher priced armour but I don't think it will be as big a market as the recent 77-80 greens one. Only time will tell though - I'm not usually prone to 'forecasting' such things so we'll just have to wait & see how it goes.

What do you think? In my confusion over all the stuff to do in Mists, have I missed a point here? Let me know in comments if you want to put me straight :)
Posted by Unknown at 13:17