New Way to Spy on your AH Competition

I don't usually spy on my Auction House competitors but I do enjoy rummaging through the Armory, looking up random strangers' alts to see what transmog gear they have or to check out gear, reforges & enchants if they have impressed me in a dungeon or something. I was checking out one of my guildmates the other evening to make them some armour when I clicked on the Roster button.

Out of curiosity, I sorted the roster by Achievement points (I'm the Achieve Queen in my guild :P) to see who was catching me up & it suddenly dawned on me - with the new Account-wide achievement system, all my alts have approximately the same number of achievement points. There is some variation but not very much as you can see from the screenshot below. 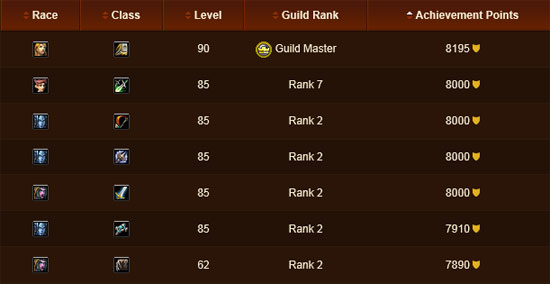 So how can we use this to our advantage in the Auction House? Well, if you saw my Rogue posting on the Auction House then went & checked her out on the Armory, you wouldn't be too far off in guessing that Hunter, Death Knight & Warrior are also mine - same guild & same number of achievement points. The rank would also give you a clue normally but my Rogue has a special rank so that throws this example off a little!

Taking it a step further, I could also keep an eye on the GM Paladin & the Priest (perhaps even the lowbie Druid too) - just above & just below, especially as no-one else in guild is even close to these alts. By adding them to my friends list, I could see when the Rogue logs off & one of the others immediately logs in.

What this doesn't do is find the lowly level 1 bank alt characters that so many serious goldmakers use. Usually the bank alt is in a guild on it's own so this wouldn't work but if you were to check out the Guild roster of your competitors alt - you may find other alts in there that are higher than level 10 & therefore show up on the Armory. Again, add them to your friends list & watch for the log out/log in connection.

How does this help us? Well, one technique to deter competition in a market niche is to post the same items at different prices on different alts - it then looks like a busy, competitive market which may deter less experienced goldmakers from even entering it. Using this spying method, you would know when someone is doing just that & then you wouldn't be scared away from that market.

Do you keep an eye on your competitors? Have you found an easier way to check them out that you are willing to share?
Posted by Unknown at 12:12