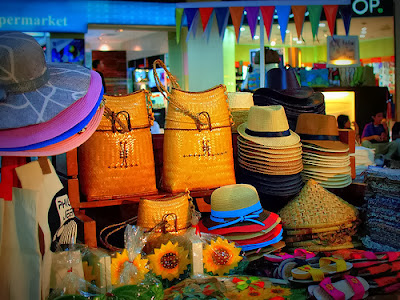 I'm just about over the jetlag after my US trip & almost back into the swing of things at work so I thought I'd better knuckle down & give you something to read here! I've been home 2 weeks now but I've hardly logged in at all so the screenshot is a summary of about 5 log ins to just post my auctions.

I need to spend some serious time topping up my crafted items inventory & use up some of the materials I have overflowing banks, bags & mailboxes too! Whilst I was away, I lost my grip on a couple of my favorite markets so the price of the Mammoth Mining Bags has dropped through the floor! I was selling them for 500g or more but now, some idiot is selling them for 85-90g! Needless to say, I'm buying up all the Borean Leather to dry up his raw material market & I'm buying his stock too. Luckily there's not too much leather floating around otherwise I'd really be running out of space! 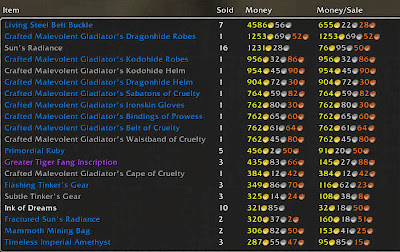 Also while I was away, the Living Steel Belt Buckle market took a turn for the better with prices up from 500g-ish to between 600 & 700g. I have a fair bit of Living Steel tucked away so the belt buckles have been a nice income for me.

Before I left, I managed to snag a whole heap of cheap Golden Lotus's - less than 40g each so rather than get all confused about which cuts to craft, I checked out the raw rare gem prices. I was pleasantly surprised to see that on several occasions, the uncut gem price was higher than most of the cuts so I just listed the raws! Not all of the colors though and not every time - mainly the red & yellow gems. I don't know why those colors should be so cheap as cut gems but I picked my days & sold the uncuts when the market was in my favor. Yes, perhaps I lost a bit of profit but I didn't have to work out which gems to craft into which cut gems & I didn't even have to log my Jewelcrafter either!

I reset my Crafted Malevolent gear prices in TSM just before I went away. I'm now setting the market price on many of these without much competition & they are selling. I have managed to pick up so much cheap Exotic Leather that it's even feasible to use the non-cooldown 50 pieces recipe to make the Magnificent Hides too!

You may notice the Mysterious Fortune Cards are missing from my sales list! Yup - someone has decided to crash the price down to 5-6g again so I'm waiting them out. I could buy them but I already have about 2000 from the last crash. The funniest thing is that when the cheap lister isn't around, someone else is listing his MFC's - at 28g each! I was maintaining the price between 14-16g & they were selling on their own. I may have to try barking a bit over the weekend - will be fun to try that again!