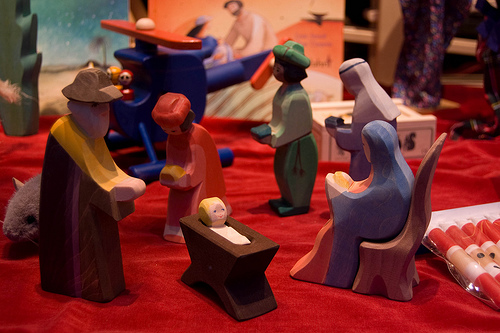 With Christmas fast approaching, I've been trying to keep on top of this little side project and my main server. I did get a little distracted by my shiny new baby Warlock so the baby Shaman I'm supposed to leveling with this bank alt has kind of been sitting around. I'm also late posting this update as you may have noticed!

Day 19
Not a huge haul from the mailbox today but I did go on a bit of a shopping spree in the herb section again. The Strange Dust market has finally been overloaded and prices have dropped considerably and although it's still very profitable, I don't particularly want Strange Dust to be my main source of gold in this project so I haven't bothered with it today. 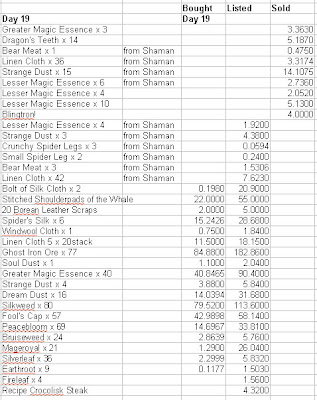 I did buy just one level 83 green armor item just to see if that market is viable on this server. It's probably too late in the month to make huge amounts of gold from but it's also a market that requires a bit of capital and storage space. It's well worth checking out if you have a bit more gold than I do here at the moment though.

As you can see from my bought list and listed prices, I'm hoping to double my money on quite a few purchases today. Some, like the Ghost Iron Ore, will be a very nice chunk of change coming in, others, like the Silverleaf or Bruiseweed, will still be double their purchase price but there weren't so many cheap ones available.

It was nice to see the Spider's Silk so cheap but with a top end price that made the flip worth the risk. It was always one of my favorite things to snatch cheap on my main server for making the Spider Silk Cloak and Boots although those have been relegated now with the advent of additional heirlooms for those slots.

Day 20
Today is Christmas Eve and due to family duties, I only had time to empty the mailbox and list some of the stuff from the Shaman's leveling adventures this morning. I still have plenty listed on the Auction House from last night soI'm still hopeful for more sales later in the day which I can pick up tomorrow morning. I was really pleased to see the Ghost Iron Ore sold and the Stitched Shoulderpads - I'll have to remember this level 83-84 green armor market if I do another project in January! 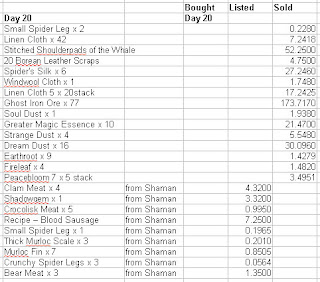 Day 21
Christmas Day has finally arrived and as I logged in to Ironforge, I realised I should have taken my banker back to Stormwind! The lag was horrendous, with so many players trying to get their Winter Veil presents from under the tree and some really obnoxious idiots who refused to get off their giant mounts or move away from the area, no matter how nicely people were asking them to!

It's another family day too so I grabbed the gold out of the mailbox (eventually, stupid lag!) and hearthed back to Stormwind to spend a few minutes in the Auction House. I relisted any expired auctions and grabbed just a few deals before heading to Mum's house. 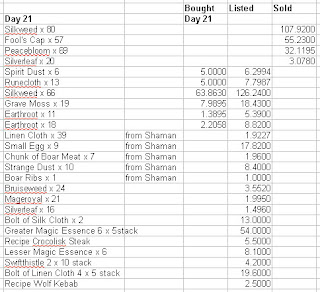 One of the markets that has surprised me over the last week or two is the Silk Cloth market. I haven't leveled a lowbie in a long while but I know some of the loot tables changed a while back. I always used to pick up loads of Silk Cloth when leveling but I'm guessing it's not so plentiful now. With Bolts of Silk Cloth listed for 10g or more, I may have to rummage through my main banks to see how much gold I'm sitting on!

I was surprised to see Small Eggs are still holding a price of about 2gold as well - the Wool Cloth & Rugged Leather markets are almost back to normal prices and Copper Bars never really moved upwards at all!

Closing gold balance after purchases today was 979 gold - woop woop! So close to the 1000 gold mark now, I can't believe how excited I am! It seems kinda silly, given how much I have on my main server but I've been enjoying this challenge and once I saw how slowly it was building, I wasn't sure I'd even make the 1000 gold point by month end!

Early on, I bought just a few cooking recipes from the vendor in Old Town. Some sold but some didn't and through leveling, I've picked up a couple more which aren't selling either. I guess with the changes to cooking at the beginning of Mists where you can level cooking almost without leaving Halfhill, this is another old market which is dying if not dead already. It's a shame really as it was a great way to pick up some starter capital for new players.