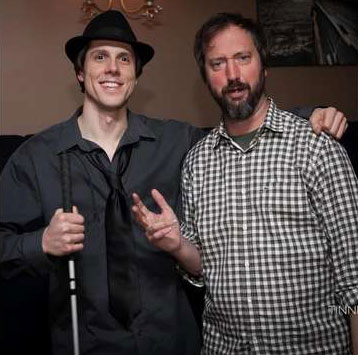 A couple of weeks ago, I published a post about Richard Harlow aka @demonicric - a WoW player who is legally blind but still manages to play his warlock using various addons & a lot of determination. I made the mistake of including a bit of a rant in that post which didn't start the drama but sure as hell didn't help either! I have a feeling all the drama has turned some people away from this fundraising so I wanted to do a second post to highlight Richard's plight & ask everyone to find it in their hearts & pockets to make a donation now, regardless of the personalities involved in the drama that has been raging on Twitter.

Just this week, Richard made a guest appearance on Eviscerated Gaming Podcast Ep 45 - the guys over there are 100% behind Richard's attempt to raise funds for special medication which has the possibility to restore some or all of his vision so they devoted the whole show to his interview. No segments, no crazy news stories & no Electronic Education music either, just 36 minutes of talking to Richard about how all this happened, how he manages to play & more importantly, why this money needs to be raised.

There's a whole host of other podcasts highlighting Richards fundraising too - he made a short bumper explaining it all but I'm very behind in my podcast listening so I can't list them all, I'm sorry.

I first heard Richard talking about playing blind on Hearthcast a couple of years ago - I'm pretty sure it was one of the very first podcasts I ever listened too & I was fascinated by his courage & endurance then. Listening to EGP last night, I was reminded just how strong the human need to win is - he could have just accepted it & hidden himself away from most of the world but no, he is out there - fighting for others in similar or worse positions than himself & I'm sure he will win this battle or there is no justice in this world.

If you would like to donate - the fundraiser page is here

Help Richard Harlow See Again
There is a deadline for this too - just 19 days left but after a fundraising event last night which raised over $4000, he is so close to his target, I have great hope that if we all chip in, he will make it.