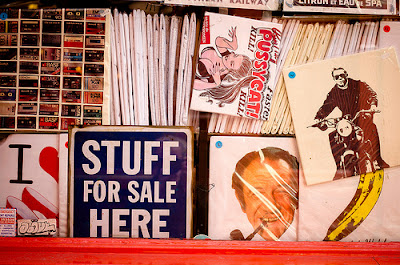 As expected, my sales have slowed down this week as I've started a new job. I was hoping I could sneak onto the Remote AH now & then but in an open plan office with a boss sitting behind me, I haven't even tried! I was only cancelling/relisting once during the day anyway but I messed up my auction timings too so one evening I got home to find they had all expired!

Given that, I'm still quite happy with my sales this week - not quite the 'ramping up' I was hoping for but hey ho, life happens! 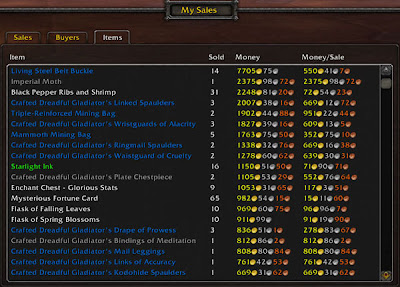 I've added screen shots of the top 2 pages of My Sales this week - I thought it might be interesting to see some of the stuff that didn't make page 1. Living Steel Belt Buckles are selling pretty well - in fact, faster than I can make the Living Steel so that market will dry up a bit for me soon. I was tempted to buy some Living Steel when it was around 400g mark but I decided against it for now - the belt buckle market isn't as high volume as I would like to be able to turn the Living Steels around quickly.

In making my Mysterious Fortune cards, I've ended up with loads of Starlight Ink. Yes, I know I could make Darkmoon Cards but I've never had much success with those & I don't have many Scrolls of Wisdom so I decided to sell some of the Inks - just to see what sort of market was there. Bear in mind that I'm only buying the very cheapest herbs at a max price of 30g a stack, so selling Starlight Ink for 70g each or more is nice, especially as my Mysterious Fortune Cards are selling themselves too. 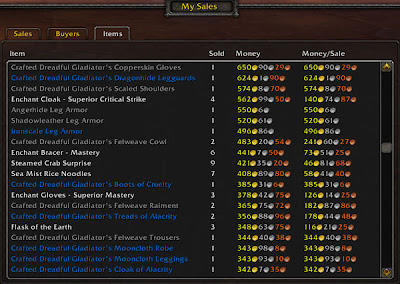 By far my biggest gold making market right now is the crafted PvP gear - both my Tailor & Leatherworker are still doing their daily cooldowns for the new patterns & I'm adding 2 of each new item every day. I'm still managing to pick up Windwool Cloth & Exotic Leather for around 30g a stack & I have over 200 stacks of each right now so that will keep me supplied for a while longer!

The Flasks market this week has sucked! Very few evening opportunities at anything over 50g which is way too close to my crafting price so I've been hanging on to most of them for now. I did make a few leg armors this week, just to test the market. Once my Leatherworker has finished her daily work orders on her farm, then I'll definitely be back to planting Songbell Seeds for the Motes of Harmony.

Enchanting has been going well this week too although I have slipped a bit on crafting scrolls - I thought I could buy the enchanting vellum from the vendor on the Travellers Tundra Mammoth so I took my priest back out into the wilds to do some questing but then it was way too much hassle to get the vellums so I let it go for now! I keep forgetting to use my banker in Ironforge to send some in the mail too. D'oh!

So there we go - Nev's fairly casual approach to selling stuffs this week.

Image © GarryKnight under Creative Commons licence
Posted by Unknown at 19:54