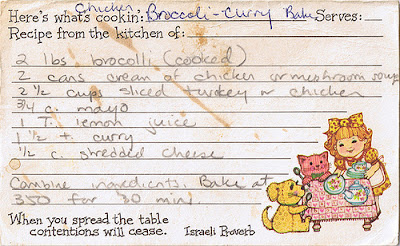 This month's topic for Cold's Gold Blogging Carnival is one that many of us can have a chat about. If you've been making gold in-game for a while, there are bound to be markets that have died on you or that you've given up on. I know I have a few but I've narrowed it down to just one market.


Name one of your historically profitable markets that is now defunct and what can we learn from that old market?


I think you can probably guess from my header image which market I chose for my topic this month - yup - vendor bought cooking recipes! I stumbled into this market within a month or two of starting to play WoW. The Pilgrims festival was in full swing as I started leveling my 2nd alt & accidently found the cooking recipe vendor in Stormwind when I wanted to add Cooking to her profession list. I had a little bit of gold then from selling turkeys I'd picked up whilst questing so off I went to the cooking trainer to get started. Except I didn't find the cooking trainer - I found the recipe vendor so I bought the recipes anyway, having no idea that I didn't really need them to level my cooking.

It was one of those serendipitous moments when I accidently bought 2 of the same recipe so I just threw it on the Auction House - I followed the existing prices & just undercut by a few copper. I think it earned me about 6g back then and it took me a few days to realise it as I was busy questing & leveling & didn't check my mail! Needless to say, I quickly ran back to the AH to check some of the other cooking recipe prices & a fledgling Goblin was born! I think I made maybe 500g from just those cooking recipes in that first foray into the AH.

Fast forward to the next Pilgrims festival a year later & I had a few more alts on the go & a level 80 too. I'd been dabbling in the AH but not in any serious way. I was in a busy guild, chatting, dungeons, raiding a bit all took up my game time so although I was never short of gold, I wasn't racking it up like some goldmakers. That inspiration/necessity came later & is a different story! So for this 2nd festival, I remembered the cooking recipes & looked up on Wowhead to see what other recipes might be out there.

The Stormwind vendor was always the easiest to get to - my bank alt lived in Stormwind but my 2nd or 3rd alt was working through Outland - I'd regularly pop over to the Allerian Stronghold in Terokkar Forest & pick up 2 or 3 of each recipe & post them back to my bank alt. This year, I raised the prices & some of them were selling for 30-50g. I loved this market - the Stormwind set cost about 1g & sold for 15-30g each - all the time!

I can't remember all the other recipe vendors but I do know I made good gold from this market right up to the launch of Mists of Pandaria. The new Cooking trainer & leveling method for cooking means that most players now level their cooking just standing in Halfhill. I bought a set of recipes from the Stormwind guy just last week - I was curious to see if there was any market left for them. A few have sold but only for 2-5g now - still a very good profit & still a reasonable market to try for some starter cash but for me, it's just not time efficient enough now.

So what can we learn? Well I think the most obvious lesson is that some players are just plain lazy or downright stupid! Think of all the cheap vendor bought stuff that sells for much better prices on the Auction House - gold bloggers have been writing about them for ages but there are still players out there who have no idea you can buy say, crystal vials from a vendor! But don't forget, I'm not even talking about limited supply items - those I kind of understand buying off the Auction House, there's a time element to getting them & for some players, time is more precious than gold. Nope, I'm talking about unlimited supply items just like cooking recipes!

There is still a small market here - some players like to have all the recipes & some prefer to level a profession as they level their alt so they do it using the older recipes & materials they pick up along the way. It's not a market I'm bothering with now although if you are just getting started, it may be worth a try. A 1g investment could net you 50-100g profit even if you have to relist them a few times.