﻿ ﻿Getting started with professions can leave you going round in circles. Some professions (especially Engineering) have numerous crafted components that you need to make before you can craft the final item you wanted in the first place! The standard craft UI (User Interface) is very simple to use but it doesn't have a crafting queue or any way of making life easier.

That's where the following two addons come in handy. The first one I use on all my alts for every craft is Advanced Trade Skill Window, ATSW for short(screenie below). I've purposely picked my Engineering alt to show you this nifty addon & how it simplifies things for multi component items. Below, you can see I've decided to make 5 Mechanical Squirrel Boxes which needs 4 components - 2 of which are also crafted by engineers. ATSW has automatically added the basic crafted components to the craft queue so I don't have to manually work out how many copper bars I need to make the copper modulator, the handful of copper bolts & the mechanical squirrel box. 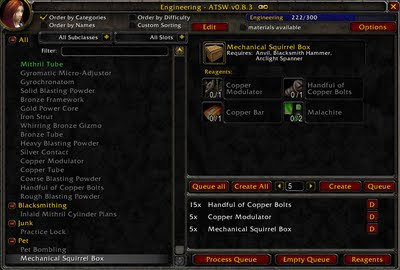 My next move would be to close this window down, go to my bank & use this addon to get all the basic materials out of the bank for me (this setting is in the Options tab, top right of the window). No more hunting various bags for all the bits, just 1 or 2 clicks & it gets them for you. Next move to the anvil & start crafting. How easy is that?

You can sort the various items by categories (default), by name (very handy when you know the name but not the category) or by difficulty level (more on that in a minute). There's a manual search bar & a drop down menu for the various categories which I use mostly on my enchanter when looking for, say glove enchants.

The second addon I want to tell you about today is Lil' Sparkeys Workshop. This addon works with ATSW & basically uses your Auctioneer scans (you have been doing them regularly, haven't you?) to calculate costs & profits for each craftable item. You can see an extra column of figures in the screenshot below - that's the Lil Sparkey's results and if you hover over one of the results figures, you get the little pop out window shown at the bottom right, which gives you the breakdowns. 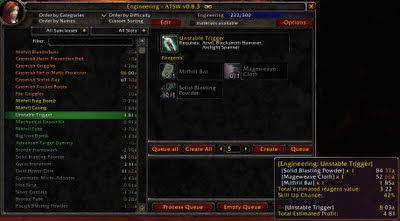 You can also see that I have sorted the craftables by difficulty for this screen shot. When I first started playing, I took skinning & leatherworking & levelled both gradually as I was questing & levelling my character. I wish I had known about these 2 addons then! I would have made the most profitable items that could give skill ups rather than the item which used the least mats. 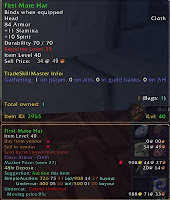 These days when I level a profession, I use the Lil Sparkeys profit figures as a guide to which of the skill up recipes to make. In the above screenie, you can see there is a huge profit to be made on the Gnomish Net-O-Matic Projector but if you look at the item details, Auctioneer has only seen 2 of them & this item is only useable by Engineers so I wouldn't be counting my chickens on this one. (screen shot of Item data given by Auctioneer, not for the Net-O-Matic but you get the idea!)
Whilst the Unstable Trigger is only showing as 4g 81s profit & it's a green skill up (less chance of a skill point), if my aim is to maximise profits whilst levelling then that is the obvious choice. Sometimes it's lots of little profits to get to the same place in the end. Don't be blinded by those big numbers, engage your brain & think about what your addons are showing you.
Another addon I will talk about at a later date is Trade Skill Master (TSM) - it is a much more complicated addon to set up but it is worth its' weight in gold & has revolutionised the way I play my glyph & gem markets. I don't think it's really a starter addon though which is why I've left it out of todays post.
Hope this helps :) Have fun, get rich :)
PS You can click on the screenshots to get larger, easily readable versions.
Posted by Unknown at 11:48