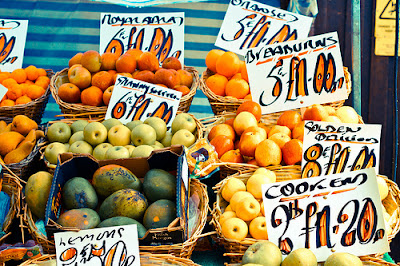 Now that I am ramping up my gold making activities again, I thought it might be interesting to restart my What's Been Selling posts. I'm not expecting any major surprises to show up in my top sales but then it wouldn't be a surprise if it was expected would it? So it's probably just going to be a recap but you may find some inspiration for new markets to look at or just find comfort in how bad my sales figures compared to your own! I'm not the most efficient gold maker so my numbers are never going to be as impressive as some bloggers out there.

If you've been reading here for a while, it will come as no surprise that my best selling item this last week has been Black Pepper Ribs & Shrimp - the +300 strength buff food. With the release of the new raid in patch 5.2 just a few weeks ago & the opening of The Isle of Thunder still in full progress on most servers, I should have known really but it still caught me unprepared for the sheer quantity of sales on my quiet little server!

Unsurprisingly then, Mogu Fish Stew (the +300 intellect buff food) is also in my top sales this week as are Flasks. Sadly my alchemists are both transmute masters so my flask profits are based purely on buying materials as cheaply as possible. I did score 60 Golden Lotus for just 25g each a week or two ago which has helped keep my costs down. There's a fair bit of competition in the Flasks market & the price can drop to just 35g per flask so I don't list any on those days. 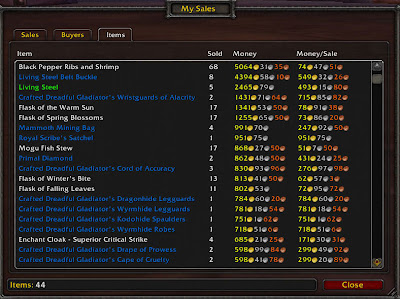 Living Steel & Living Steel Belt Buckle are mainstays of my gold making - I always make my daily Living Steel on both Alchemists and built up a bit of stock whilst my Blacksmith was still leveling. Now that she can make the Belt Buckles, I'm selling much less plain Living Steel and focusing more on Belt Buckles as the sale price is usually higher. This market is pretty volatile though - just yesterday, Living Steel was down to 375g & tomorrow it could be back up to 550g.

I've also been doing my daily Leatherworking Magnificent Hide cooldown to get the new PvP patterns & I make 2 of each new piece straightaway. I check to see which have sold overnight & make new pieces to keep my stock at 2 for each PvP item. I do the same thing on my Tailor with her Imperial Silk cooldown too and as you can see above, the prices are holding up fairly well.

I'm also still selling Mammoth Mining Bags although I have a competitor now who seems to think they should be priced at 150g-ish when I've been selling them for months at 375g. I did buy her out a couple of times but she just keeps on listing so now I've decided to buy all the Borean Leather & starve her of materials! It's working but slowly - I've got the price back up to around the 250g mark this week. She may have done me a small favor though - at 375g, I was only selling 1 or 2 a week but at 250g, I've sold 4 this week & 8 last week. Maybe I was being a little bit greedy but it is a good reminder that taking a little bit less profit per item may result in increased sales thereby increasing overall profits.

Just yesterday I crafted a whole bunch of enchant scrolls so next week, we'll see how they did! I also made up a bunch of Rich Purple Silk Shirts after snagging a bunch of Silk Cloth for just 4g a stack. I price these at 79g each but again, I may drop the price a little to see if I end up selling more.