So I finally got my new place sorted out & my internet all connected up so I only missed a day of sales this week. But I got sidetracked by my US account, as I decided to level another scribe over there so my EU sales have suffered again although not as much as last week!

Sales of almost 21000 gold with purchases of about 5000 gold means an overall increase in liquid gold of 16000 gold. I'm still below the half million mark after my mount spending spree a few weeks ago but I'm quite happily just poodling along, keeping my fingers in various markets & looking for new little niches here & there.


Late last summer, I decided I wanted the Dark Iron set for my DK's transmog outfit so I spent a little time farming materials in Molten Core. Then I took a break & it all got forgotten until recently but I've since found out that I can get very similar stuff from a vendor in Shattrath so I put my Blood of the Mountain on the auction house. It took maybe 2 weeks but they did sell at last which put them at the top of my sales value list. 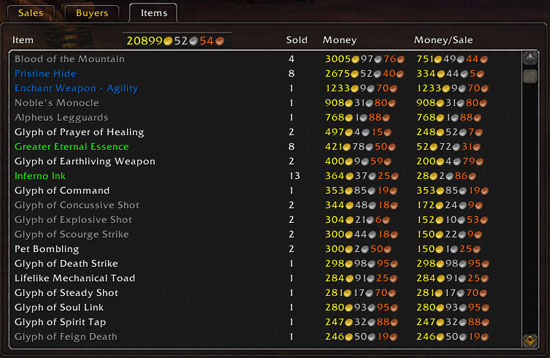 The Pristine Hides & the Noble's Monocle are also 'clearing out my banks' items - I've already made maybe 10000 gold from random stuff out of the mess of my banks & these were a nice bonus this week!

My glyph sales are fairly poor overall, I have more glyphs unlisted than I ever have before. I mentioned last week that there is someone tanking the prices so much of my 5000 gold expense this week have been low priced glyphs. I wasn't in the mood to buy him out completely but where there was only 1 or 2 low priced ones before a decent price one, I bought them out to relist at the higher price. For some glyphs, this has worked well but for others the tanker just listed a few more. I'm not worried though - they are all below my crafting cost so I'm looking at it as building some glyph stock for Mists :)

Items that don't show up on this screenshot include level 77-80 green armour - each day, I have been checking several times a day to try to find some good deals. For me, that means purchase cost below 50 gold & I then relist them immediately at 199 gold.

I also had an interesting conversation with Cold a week or two ago & he gave me a heads up on his Bargain Blues Stockpiling post. Now I've never really done many battlegrounds & I certainly have no idea about twinking so this was an interesting sideline for me. I have managed to pick up a few items but rather than keeping them in my bank for Mists of Pandaria release, I've put them back on the Auction House for a healthy mark up. I've sold one or two pieces but again, these are a more long term investment for me.

So that was my week - ok but nothing spectacular but then my server is very quiet now. I'm pretty sure it will liven up again soon of course but if it doesn't, I'll be ok - I just like to poodle along & faff at my own speed anyway :) have a good week peeps, Nev