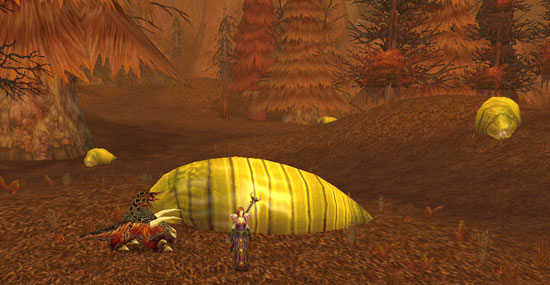 A week or so ago, I was a guest on Episode 38 of PowerWord:Gold podcast where Jim & I spoke a fair bit about the pets that will be classed as Rares when Mists of Pandaria is released in September. On the podcast I said that Mr Grubbs was  an easy one to pick up because I clearly remember my paladin picking up maybe 8 pets in the area whilst finishing the zone or when farming for the Crusader enchant but I wanted to test my statement so here are the results - Arrrgggghhhhhhh!

As you may have guessed, it's been a very frustrating week. Reading the comments about Mr Grubbs on Wowhead, there were several likely farming spots mentioned but there's also a mention that the further into the quests for the zone you are, the higher your chance of getting Mr Grubbs.

I decided to test the farming spots & the more quests theory so first off I took my Loremaster Paladin over to Eastern Plaguelands. She picked up Fiona's Lucky Charm (more about that in a minute) & off she went to The Noxious Glade. Twenty minutes later & 12 Hidden Stash drops, she had picked up not one but two Mr Grubbs! Great I thought - I did remember correctly that this was an easy 'rare' to pick up.

Next I dug out my rogue from the depths of Ironforge where she has been sitting for months & dropped her off at Thondoril Point to pick up Fiona's Caravan. She never quested here so I had to do just 6 quests to get access to Fiona's Lucky Charm.

Pick up 'Tarenar Sunstrike' & 'Gidwin Goldbraids' quests from Fiona then I would go south to Tarenar first who then gives you 'What I Do Best' - just a kill 5 thingies quest. Once you've done that, he will give you a 2nd quest called 'Gift for Fiona' which requires killing the Plaguehounds. The area for the Plaguehounds overlaps with much of the route from Tarenar to the cave in the north where Gidwin is trapped so kill the Plaguehounds along the way.

Once you've found Gidwin, he will give you 'Just Encased' quest & asks you to get some stuff off the big ant-like creatures in the cave. If you've done any concentrated critter killing for the Guild Achievement, you may recognise this cave - it's full of little skittery bugs. Grab the goo & then go back & release Gidwin. He then gives you 'Greasing the Wheel' - this requires collecting some flowers for Fiona - they are all along the river & path back to Fiona so you shouldn't have any problems finding them. Once you hand in the last 2 quests to Fiona, she will let you choose a 'gift' from the caravan - pick the Lucky Charm & you are ready to start randomly killing anywhere within the zone.

It took me maybe 10 minutes to do these quests on my level 85 rogue then I wandered off to Zul' Mashar for my killing spree - 50 minutes & 35 Hidden Stash drops later, I was swearing blue murder at the rotten RNG when at last Mr Grubbs dropped for me.

Now this is where the frustration really set in! I have a level 44 Warlock that I want to level before Mists of Pandaria is released & Eastern Plaguelands is a level 40-45 zone so yay! I thought - farm, quest & test my theory all at the same time.

Adding insult to injury, I was chatting to Cold one evening & mentioned this post so he decided to give it a go too - I'm surprised no-one heard my rage when he managed to pick up Mr Grubbs within 20 minutes.

So I guess my summary would still be it's a fairly easy pet to pick up - on a level 85 at least. It looks like pure RNG as to how long or how many Hidden Stashes you have to find rather than being anything to do with the number of quests or passengers picked up on Fiona's Caravan.

We know that when Mists of Pandaria goes live, pets will become account wide so if you have the same pet on multiple characters, you will get the 'extras' back in the mail. What we don't know yet is whether these extras will be sellable. Mr Grubbs is also bind on pickup at the moment so the 2 I picked up on my Paladin are seemingly useless but I'm keeping them just in case they become unbound like some of the holiday pets did earlier this year. If they do then these could be a fairly painless moneymaker at some future time.
Posted by Unknown at 21:03